Items related to The Ransomed Crown (The Saga of Roland Inness) (Volume...

The Ransomed Crown (The Saga of Roland Inness) (Volume 4) 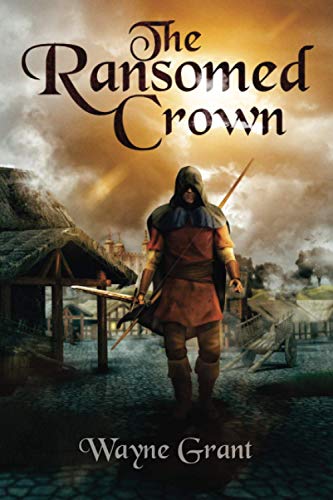 King Richard has made peace with Saladin, but must run a gauntlet of enemies to get home from the Crusade. While England waits for her King, Prince John spares neither lives nor fortune to usurp his brother’s crown. Roland Inness and Millicent de Laval once more find themselves at the centre of a growing civil war. Each will play a crucial role in deciding who will ultimately sit on the throne of England.

The Saga of Roland Inness series begins with this tale of a fourteen-year-old boy who has extraordinary skill with a longbow. It is a story of courage, loyalty, honor and treachery. Most of all, it is a story of high adventure set in a time so filled with drama it has spawned legends that fascinate people to this day. It is the time of Richard the Lionheart, Robin Hood, Eleanor of Aquitaine and William Marshall, legendary figures all--some real and some fictional.

The first four books in the saga—Longbow, Warbow, The Broken Realm and The Ransomed Crown tell the coming-of-age story of the young archer. A Prince of Wales, the fifth in the series, follows Roland Inness as he leads the legendary Invalid Company into Wales to help Llywelyn the Great win a throne. The sixth book in the series, Declan O'Duinne, set in Ireland, was released in November, 2018 and a new Roland Inness adventure will be published in late summer, 2019.

If you would like to know more about the author or get updates on new books, visit his webpage at www.waynegrantbooks.com or the Longbow Facebook page, www.facebook.com/Longbowbooks/ .

Wayne Grant grew up in a tiny cotton town in rural Louisiana where hunting, fishing and farming are a way of life. Between chopping cotton, dove hunting and Little League ball he developed a love of great adventure stories like Call It Courage and Kidnapped.Like most southern boys he saw the military as an honorable and adventurous career, so it was a natural step for him to attend and graduate from West Point.

He just missed Vietnam, but found that life as a 2nd LT in an army broken by that war was not what he wanted. After tours in Germany and Korea, he returned to Louisiana and civilian life.

Through it all he retained his love of great adventure writing and when he had two sons he began telling them stories before bedtime. Those stories became his first novel, Longbow.Longbow is the first book in the Saga of Roland Inness series. The sixth book in the series, Declan O'Duinne, was published in November, 2018 and a new Roland Inness adventure will be out in late summer 2019.

The Adventures Just Keep Coming!
I have enjoyed all the books in this well written series. A lot is packed into 3 years! This book was a satisfying end to the Roland Innes series, but it looks like he might appear again in another book by this author.
Roland and his friends have survived many adventures throughout England and the Holy Land, and now back in England they are beset by old enemies and helped by new friends.
I cannot recommend these books highly enough for young teens and above.

1. The Ransomed Crown: Volume 4 (The Saga of Roland Inness)