Items related to Discrimination and Disparities 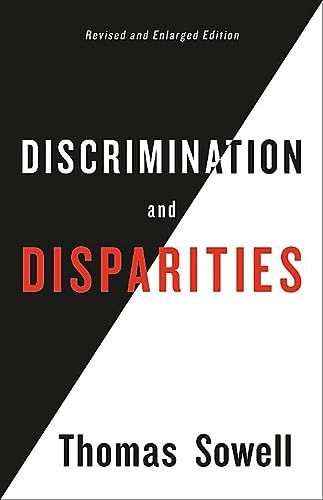 An enlarged edition of Thomas Sowell's brilliant examination of the origins of economic disparities
Economic and other outcomes differ vastly among individuals, groups, and nations. Many explanations have been offered for the differences. Some believe that those with less fortunate outcomes are victims of genetics. Others believe that those who are less fortunate are victims of the more fortunate.
Discrimination and Disparities gathers a wide array of empirical evidence to challenge the idea that different economic outcomes can be explained by any one factor, be it discrimination, exploitation, or genetics. This revised and enlarged edition also analyzes the human consequences of the prevailing social vision of these disparities and the policies based on that vision--from educational disasters to widespread crime and violence.

Thomas Sowell is a senior fellow at the Hoover Institution, Stanford University. He is the author of dozens of books and the recipient of various awards, including the National Humanities Medal, presented by the president of the United States in 2003.

"Sowell's calm and calculated look at racial disparity in America is a stunning work of brevity and reason."―Federalist

"A sane, balanced and highly informed discussion of many of the central issues of the day."―Washington Times

"Everything Dr. Sowell writes is worth reading, but this book couldn't be more timely. If there is any topic that needs a strong dose of empirical data and common sense, it is this one."―Power Line

"[Sowell] writes on economics in a manner that is not only accessible, but also relevant and even riveting."―The Conservative Woman

"Few works on politically explosive topics maintain such a consistent focus on empirical evidence while avoiding rhetorical jabs at opponents...those who cling to this dogma with religious fervor will likely avoid Sowell's fact-filled book like kryptonite. Folks with less dogmatic proclivities, however, would do well to peruse this concise work."―American Thinker

"Throughout his career, Thomas Sowell has been fearless in confronting uncomfortable facts about human nature and ill-conceived public policies. His new book, Discrimination and Disparities, is the latest in a long line of works that calmly but persuasively shatter myths and ideological beliefs about race, ethnicity, economics, history, and culture."―New York Journal of Books