Items related to The Revolution Betrayed 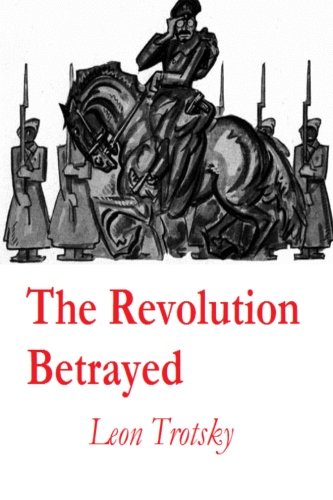 The Revolution Betrayed: What Is the Soviet Union and Where Is It Going? is a book published in 1937 by the exiled Soviet Bolshevik leader Leon Trotsky. This frequently reprinted work analyzed and criticized the course of historical development in the Soviet Union following the death of Lenin in 1924 and is regarded as Trotsky's primary work dealing with the nature of Stalinism. The book was written by Trotsky during his exile in Norway and was originally translated into French by Victor Serge. The most widely available English translation is by Max Eastman.

Leon Trotsky (7 November [O.S. 26 October] 1879 – 21 August 1940) was a Marxist revolutionary and theorist, a Soviet politician who engineered the transfer of all political power to the Soviets with the October Revolution of 1917, and the founding leader of the Red Army. Trotsky initially supported the Menshevik Internationalists faction of the Russian Social Democratic Labour Party. He joined the Bolsheviks just before the 1917 October Revolution, and eventually became a leader within the Communist Party. He was, alongside Lenin, Zinoviev, Kamenev, Stalin, Sokolnikov and Bubnov, one of the seven members of the first Politburo, founded in 1917 to manage the Bolshevik Revolution. During the early days of the Russian Soviet Federative Socialist Republic (RSFSR) and the Soviet Union, he served first as People's Commissar for Foreign Affairs and later as the founder and commander of the Red Army, with the title of People's Commissar of Military and Naval Affairs. He was a major figure in the Bolshevik victory in the Russian Civil War (1918–1923). After leading a failed struggle of the Left Opposition against the policies and rise of Joseph Stalin in the 1920s and against the increasing role of bureaucracy in the Soviet Union, Trotsky was removed from power (October 1927), expelled from the Communist Party (November 1927), exiled to Alma–Ata (January 1928), and exiled from the Soviet Union (February 1929). As the head of the Fourth International, Trotsky continued to oppose the Stalinist bureaucracy in the Soviet Union from exile. On Stalin's orders, he was assassinated in Mexico in August 1940 by Ramón Mercader, a Spanish-born Soviet agent. Trotsky's ideas formed the basis of Trotskyism, a major school of Marxist thought that opposes the theories of Stalinism. He was written out of the history books under Stalin, and was one of the few Soviet political figures who were not rehabilitated by the government under Nikita Khrushchev in the 1950s. It was not until the late 1980s that his books were released for publication in the Soviet Union, which dissolved a short time later.