Items related to Keeping the Republic: Power and Citizenship in American... 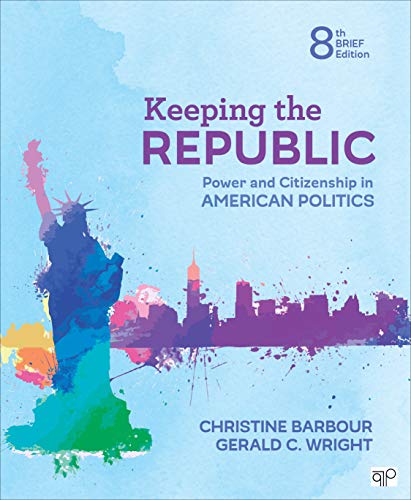 Keeping the Republic gives students the power to

Keeping the Republic draws students into the study of American politics, showing them how to think critically about "who gets what, and how" while exploring the twin themes of power and citizenship. Students are pushed to consider how and why institutions and rules determine who wins and who loses in American politics, and to be savvy consumers of political information.

The thoroughly updated Eighth Edition considers how a major component of power is who controls the information, how it is assembled into narratives, and whether we come to recognize fact from fiction. Citizens now have unprecedented access to power – the ability to create and share their own narratives – while simultaneously being even more vulnerable to those trying to shape their views. The political landscape of today gives us new ways to keep the republic, and some high-tech ways to lose it.

Throughout the text and its features, authors Christine Barbour and Gerald Wright show students how to effectively apply the critical thinking skills they develop to the political information they encounter every day. Students are challenged to deconstruct prevailing narratives and effectively harness the political power of the information age for themselves.

Up-to-date with 2018 election results and analysis, as well as the impact of recent Supreme Court rulings, shifting demographics, and emerging and continuing social movements, Keeping the Republic, Eighth Edition is a much-needed resource to help students make sense of politics in America today.

Carefully condensed from the full version by authors Christine Barbour and Gerald Wright, Keeping the Republic, Brief Edition gives your students all the continuity and crucial content, in a more concise, value-oriented package.

Christine Barbour teaches in the Political Science Department and the Hutton Honors College at Indiana University, where she has become increasingly interested in how teachers of large classes can maximize what their students learn. She is working with online course designers to create an online version of her Intro to American Politics class. At Indiana, Professor Barbour has been a Lilly Fellow, working on a project to increase student retention in large introductory courses, and a member of the Freshman Learning Project, a university-wide effort to improve the first-year undergraduate experience. She has served on the New York Times College Advisory Board, working with other educators to develop ways to integrate newspaper reading into the undergraduate curriculum. She has won several teaching honors, but the two awarded by her students mean the most to her: the Indiana University Student Alumni Association Award for Outstanding Faculty and the Indiana University Chapter of the Society of Professional Journalists Brown Derby Award. When not teaching or writing textbooks, Professor Barbour enjoys playing with her dogs, traveling with her coauthor, and writing about food. She is the food editor for Bloom Magazine of Bloomington and is a coauthor of Indiana Cooks!(2005) and Home Grown Indiana (2008). She also makes jewelry from precious metals and rough gemstones and if she ever retires, she will open a jewelry shop in a renovated air-stream on the beach in Apalachicola, Florida, where she plans to write another cookbook and a book about the local politics, development, and fishing industry.

Gerald C. Wright has taught political science at Indiana University since 1981, and he is currently the chair of the political science department. An accomplished scholar of American politics, and the 2010 winner of the State Politics and Policy Association’s Career Achievement Award, his books include Statehouse Democracy: Public Opinion and Policy in the American States (1993), coauthored with Robert S. Erikson and John P. McIver, and he has published more than fifty articles on elections, public opinion, and state politics. Professor Wright has long studied the relationship among citizens, their preferences, and public policy.

He is currently conducting research funded by grants from the National Science Foundation and the Russell Sage Foundation on the factors that influence the equality of policy representation in the states and in Congress. He is also writing a book about representation in U.S. legislatures. He has been a consultant for Project Vote Smart in the past several elections. Professor Wright is a member of Indiana University’s Freshman Learning Project, a university-wide effort to improve the first-year undergraduate experience by focusing on how today’s college students learn and how teachers can adapt their pedagogical methods to best teach them. In his nonworking hours, Professor Wright also likes to spend time with his dogs, travel, eat good food, fish, and play golf.
Review:

"Barbour and Wright′s Keeping the Republic, Brief Edition is the gold standard among condensed American Government textbooks. Its crisp writing and engaging narratives about "What′s at Stake" set it apart from the field substantively; its comprehensiveness and affordability make it attractive to students." Author: Brett Curry

1. Keeping the Republic: Power and Citizenship in American Politics