Items related to BUNDLE: Bachman: Statistics for Criminology and Criminal... 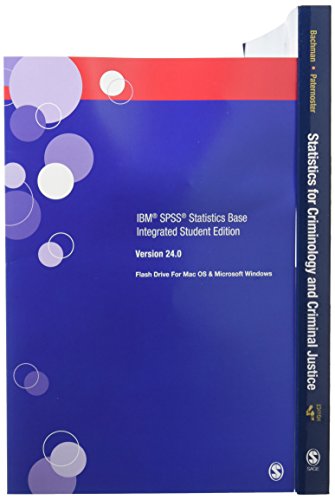 Ronet D. Bachman, PhD, worked as a statistician at the Bureau of Justice Statistics, U.S. Department of Justice, before going back to an academic career; she is now a professor in the Department of Sociology and Criminal Justice at the University of Delaware. She is coauthor of Statistical Methods for Criminology and Criminal Justice and coeditor of Explaining Criminals and Crime: Essays in Contemporary Criminal Theory. In addition, she is the author of Death and Violence on the Reservation and coauthor of Stress, Culture, and Aggression; Murder American Style; and Violence: The Enduring Problem; along with numerous articles and papers that examine the epidemiology and etiology of violence, with particular emphasis on women, the elderly, and minority populations as well as research examining desistance from crime. Her most recent federally funded research was a mixed-methods study that examined the long-term desistance trajectories of drug-involved offenders who were released from prison in 1990, followed from 1990 through 1995, and interviewed again in 2009.

Shipping: US$ 13.71
From United Kingdom to U.S.A.
Destination, rates & speeds