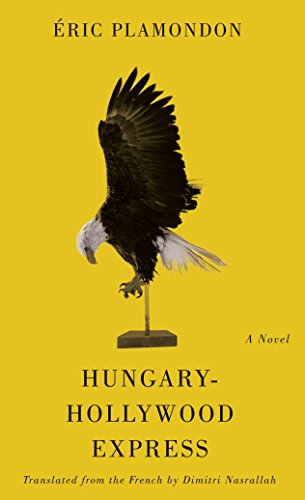 When Gabriel Rivages recounts the life of Olympic gold medalist and silver-screen heart-throb Johnny Weissmuller (1904-1984), he brings to life a vibrant patchwork of America’s 20th century, from its athletic exploits to its literary underground, from its cinematic glory to its obscure failures. Burroughs sells pencil sharpeners; Einstein crosses paths with squirrel hunters; JFK becomes an airport; Tarzan saves Jane; a corrupt accountant runs away with the savings; WWII makes waves in Lake Michigan; and a living legend wraps up a storied career as a host in a Las Vegas restaurant. Hungary-Hollywood Express is the first novel in Éric Plamondon’s 1984 trilogy. The second and third volumes, Mayonnaise and Apple S, turn their lens on the poet Richard Brautigan and Apple founder Steve Jobs respectively.

Dimitri Nasrallah is the author of two award-winning novels: Niko and Blackbodying. Éric Plamondon is the author of the 1984 trilogy, which was quickly considered a shining example of a new generation of Québécois literary innovation.

"A portrait and kaleidoscope of a character who is truer than life." -Josée Lapointe, La Presse

"A novel for the Wikipedia generation." -Dominque Tardif, Voir

"[Plamondon] demonstrates that we can approach drama without falling into pathos or cynicism." -Judy Quinn, Nuit Blanche

Book Description Paperback. Condition: New. Paperback. Shipping may be from multiple locations in the US or from the UK, depending on stock availability. 164 pages. 0.181. Seller Inventory # 9781550654509

Shipping: US$ 4.39
From United Kingdom to U.S.A.
Destination, rates & speeds