Items related to Love Of Shopping Is Not A Gene

Dagg, Anne; Innis Dagg, Anne Love Of Shopping Is Not A Gene 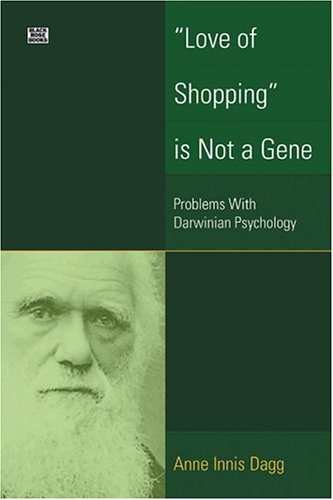 Based on Darwin's theory of evolution and natural selection, "Evolutionary Psychology" claims that "its all in our genes." At the beginning of the 21st century, genes are used to explain almost every aspect of human life, from social inequalities to health, sexuality, and criminality. This book is a critique of Darwinian psychology--alias evolutionary psychology, alias sociobiology--the study of the social behavior of animals and people based on evolution. In this provocative work, Innis Dagg, an eminent and outspoken critic of this ideology, first presents an overview of the theory and its popularity both among professionals and lay people, then she examines concepts of social behavior--based on 'genes vs culture'--including: aggression in the form of rape, infanticide, homicide, gang violence and war, and general criminality; homosexuality in both the human and the animal world; and race, IQ, and environment. Focusing on the problems present in much Darwinian psychological research--flawed data, faulty analysis, and political motives--this controversial book offers the first comprehensible critique of the most popular scientific theory of the late 20th century: Evolutionary Psychology. In the end, Innis Dagg presents a new perspective which acknowledges the complexity of life by placing at its center the living organism, in its environment, rather than the gene.

Anne Innis Dagg has an MA in Genetics and a PhD in Animal Behavior. She is the author of numerous books, including The Camel: Its Ecology, Behavior and Relationship With Man, Moreton Island: Its History and Natural History, and The Feminine Gaze: A Compendium of Non-Fiction Women Authors and Their Books. She is currently Academic Director of Independent Studies at the University of Waterloo in Ontario.