Items related to Guide to the Oceans (Firefly Pocket series) 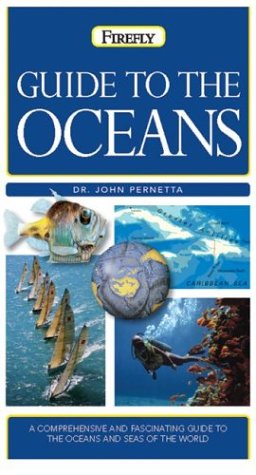 A richly illustrated guide to the world's oceans and seas.

Guide to the Oceans is a handy reference that provides comprehensive information about every aspect of the world's oceans and seas. The book features vibrant color photographs, maps, artwork and well organized data.

Guide to the Oceans is an ideal reference for anyone with an interest in the sea.

The Oceans
Genesis of the Oceans

In Greek mythology, the great river or sea that surrounded at disk of the Earth, was personified by Oceanus, the god of the primeval waters. Now, of course, we know that the world is spherical and that slightly more than 70 percent of its surface is covered by the oceans.

From space, the blue of the Earth reflects the vast expanse of water covering its surface. From a point in outer space above the center of the Pacific Ocean, the entire planet seems to be composed of water, since no land is visible. The dominance of the ocean has earned Earth the title of the 'Blue Planet'.

The oceans are by far the largest store of water on the planet. In comparison, the freshwater contained in icecaps, rivers, lakes and groundwater is much smaller, while the clouds and water vapor in the atmosphere make up only a minute fraction of the total. Water leaves the oceans through evaporation and enters via rainfall, rivers and groundwater seepage. The total volume of water involved in this continuous cycle is approximately 108,000 cubic miles 1450,000 cubic kilometers).

Surprisingly, the Earth's crust also contains significant amounts of water. The water either permeated into the underlying rocks or was incorporated into sediments during their formation. In areas where volcanic activity occurs, the molten rock (magma) absorbs water as it rises toward the surface of the crust where it is released as superheated steam during volcanic eruptions. It seems that the water in the crust is critical to the formation of magma, since it lowers the melting point of the rock at depth.

Most of the water now lying in the oceans has been on Earth since very early in geological history, mainly in the form of water vapor in the atmosphere. As the Earth cooled, the condensing water vapor fell as rain, forming rivers and filling the lower-lying areas to form the oceans. Although we cannot be certain as to when this process took place, geological evidence suggests that surface waters existed 3,800 million years ago. The evidence takes the form of the oldest-known sedimentary (water-formed) rock, discovered in Greenland. While evidence of simple organisms has been found in types of rock 3400 to 2000 million years old, the earliest traces of multicelled animals are a mere 600 million years old.

It is in the oceans that life began. Initially it took the form of simple organic molecules, followed later by self-replicating, large organic molecules -- the nucleic acids. These would eventually provide the mechanism of reproduction, enabling cells to divide and give rise to new cells like themselves.

For nearly 2000 million years, simple, single-celled microorganisms were the only form of life on planet Earth. Their existence depended on the presence of water, and it was their life processes that altered the composition of the atmosphere. At first, Earthy atmosphere was dominated by water vapor, methane and ammonia, but the mere existence of photosynthesizing microorganisms led to increasing concentrations of oxygen in the atmosphere. This oxygen led in turn to the formation of the ozone shield which now protects life on Earth from the harmful effects of the Sun's ultraviolet radiation.

The ocean basins have not always had their present form. The movement of the continents and ocean-floor spreading have resulted in periods when the oceans were quite differently arranged. Some 225 million years ago, the land formed a single, large continental land mass called Pangaea, which was surrounded by a superocean, Panthalassa. When this land mass broke up some 180 million years ago to form two super continents (Laurasia to the north and Gondwanaland to the south), the Tethys Sea was formed between them. This pan-tropical sea was subsequently closed by the collision of what is now Africa with the Eurasian mainland. The present ocean basins are thus relatively young, being less than 80 million years old, and the oldest rocks under the ocean floor are a mere 200 million years old compared with the oldest igneous rocks on land, which are some 4200 million years old.

The ocean floor has a remarkable topography, with vast plains covered in a thick layer of sediment, and huge mountain ranges, the midoceanic ridges where upwelling (vertical water movement) from the mantle below pushes the ocean crust toward the surface. Some continents are bounded by wide and comparatively shallow continental shelves, while in areas where the ocean mantle descends beneath the continental margins, deep trenches such as the Peru-Chile trench are found. Where major rivers empty into the sea, their sediment is deposited near the mouths of the rivers to form huge underwater deltas, fans of sediment that spread out on the continental shelf, or cascade over the edge of the continental margin to the abyss below.

The oceans are in constant motion. They are influenced by the rotation of the Earth, the gravitational pull of the Sun, the Moon and nearby planets, and by the movements of the atmosphere. This motion has important consequences, since the oceans circulate heat from the warmer tropics to the colder, higher latitudes, so influencing the climate of neighboring landmasses. Ocean circulation is not only an important component of the global climate system, but also results in quite different physical and chemical conditions for life in different parts of the ocean basins.

The environment of the ocean varies drastically. Conditions range from the warmer, sunlit surface waters to the dark and colder ocean deeps, and from the high-salinity ocean basins such as the Red Sea to the low-salinity conditions of the Bay of Bengal.

The surface waters of the ocean are generally low in nutrients, particularly in tropical areas, and this limits the rate of primary production by phytoplankton. Phytoplankton are single-celled plants that use sunlight to form more complex chemicals and which serve as the basis for marine life. The deep ocean, on the other hand, contains vast stores of nutrients, and where these are brought to the surface upwelling, there is a high production of plankton and fish. High concentrations of nutrients also occur in coastal regions where surface run-off carries nitrogen, phosphorus and organic material to the coastal waters.