Items related to The Cremation of Sam McGee

The Cremation of Sam McGee 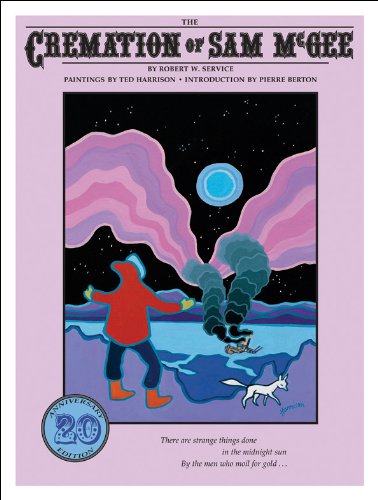 In 1986 Kids Can Press published an edition of Robert Service's ?The Cremation of Sam McGee? illustrated by painter Ted Harrison, who used his signature broad brushstrokes and unconventional choice of color to bring this gritty narrative poem to life. Evoking both the spare beauty and the mournful solitude of the Yukon landscape, Harrison's paintings proved the perfect match for Service's masterpiece about a doomed prospector adrift in a harsh land. Harrison's Illustrator's Notes on each page enhanced both poem and illustrations by adding valuable historical background.

Upon its original publication, many recognized the book as an innovative approach to illustrating poetry for children. For years The Cremation of Sam McGee has stood out as a publishing landmark, losing none of its appeal both as a read-aloud and as a work of art. Kids Can Press proudly publishes this deluxe hardcover twentieth anniversary edition --- complete with a spot-varnished cover, new cover art and heavy coated stock --- of a book that remains as entrancing as a night sky alive with the vibrant glow of the Northern Lights.

Robert Service was born in England and earned a worldwide reputation as a poet of the Arctic. He died in Europe in 1958.

Ted Harrison is an internationally acclaimed artist best known for his vibrant interpretations of the Canadian North. He lives in Victoria, British Columbia.

No poem that I can think of, especially a comic one, was ever rendered so electrifyingly in paint―Book World

There are strange things done in the midnight sunBy the men who moil for books;The Arctic trails have their secret talesthat could give you second looks,The Northern Lights have seen their sightsBut the wisest they ever did seeWas the day in'06, complete with great pixThey reissued Sam McGee.―Globe and Mail

1. The Cremation of Sam McGee

2. The Cremation of Sam McGee

3. Cremation of Sam McGee, The

4. The Cremation of Sam McGee

5. THE CREMATION OF SAM MCGEE