Items related to Marvelous Transformations: An Anthology of Fairy Tales... 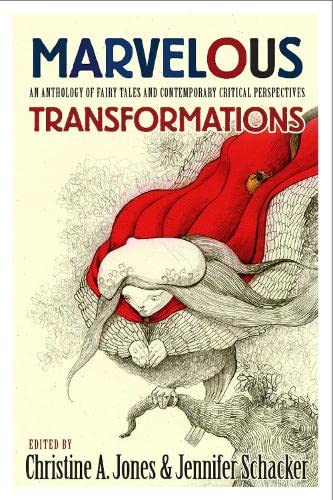 Marvelous Transformations is an anthology of tales and original critical essays that moves beyond canonized “classics” and old paradigms, documenting the points of historical connection between literary tales and field-based collections.

This innovative anthology reflects current interdisciplinary scholarship on oral traditions and the cultural history of the print fairy tale. In addition to the tales, original critical essays, newly written for this volume, introduce readers to differing perspectives on key ideas in the field.

Christine A. Jones is Associate Professor of French at the University of Utah. She is the author of Shapely Bodies: The Image of Porcelain in Eighteenth-Century France (University of Delaware Press, 2012) and is currently completing annotated translations of Charles Perrault’s fairy tales.

Jennifer Schacker is Associate Professor in the School of English and Theatre Studies at the University of Guelph. She is the author of National Dreams: The Remaking of Fairy Tales in Nineteenth-Century England (University of Pennsylvania Press, 2003), winner of the 2006 Mythopoeic Scholarship Award.

“In the abundant corpus of fairy tale anthologies, Marvelous Transformations stands out in more ways than one. Unlike other anthologies that usually organize their contents according to tale type, motif, or country of origin, the richly diverse collection edited by Christine A. Jones and Jennifer Schacker presents fairy tales in chronological order, thus creating an illuminating timeline that stretches from the 2nd century BCE to the end of the first decade of the 21st century. Envisioned as a ‘journey through fairy tale history,’ Marvelous Transformations is full of pleasant surprises in the form of obscure and rarely anthologized texts, little known writers/collectors, and a series of brand new essays penned by some of the most prominent fairy tale scholars.” ― Nada Kujundžic, International Research Society for Children’s Literature

“Christine Jones and Jennifer Schacker have created an unusual and fascinating anthology dedicated to the study of folklore and fairy tales. Instead of collecting a variety of tales from a particular country or from different parts of the world, they have assembled international texts chronologically, from earlier written traditions to contemporary transcriptions and translations. They have also included brief commentaries and essays on important topics. Their aim is to foster an interdisciplinary and historical approach to understanding the complex evolution of a genre, and it is to their great credit that they have produced a most original book that will be useful to readers who seek to grasp the mysterious changes that fairy tales have undergone ever since once upon a time.” ― Jack Zipes, Professor Emeritus, University of Minnesota

“We may think we know what fairy tales are and what they mean, but the stories and critical essays collected by Christine Jones and Jennifer Schacker succeed in making the seemingly familiar decidedly unfamiliar. Marvelous Transformations invites readers to discover fairy tales both well known and neglected and, at the end of the volume, a series of short essays that bring together the best of current literary and folkloric approaches to the genre. Students, teachers, scholars―indeed, all readers interested in fairy tales―have much to learn from this volume.” ― Lewis Seifert, Brown University

“This volume’s strength lies in both its range of primary source stories and the span of secondary criticism included. With their selection of texts, Jones and Schacker have also attempted to situate fairy tale studies in a broader interdisciplinary context that emphasizes the relationship between literary history and folklore history, particularly field-based oral storytelling.” ― Johanna Denzin, Columbia College

“Jones’s and Schacker’s Marvelous Transformations is not simply another fairytale collection but a true contribution to scholarship and a powerful statement on the future of fairytale studies. In weaving together tales from around the world and scholarship from a variety of disciplines, the editors make a strong case for a fresh look at the fairytale form. While I highly recommend this book overall, I especially recommend it for use in classrooms: it demonstrates the diversity, beauty, and endurance of fairy tales and should be a delightful surprise to undergraduates who come in thinking fairy tales are all the sugarcoated Disney stories they remember from when they were small. I am certain that I too will refer back to this text again and again.” ― Brittany Warman, Journal of Folklore Research

5. Marvelous Transformations An Anthology of Fairy Tales and Critical Perspectives