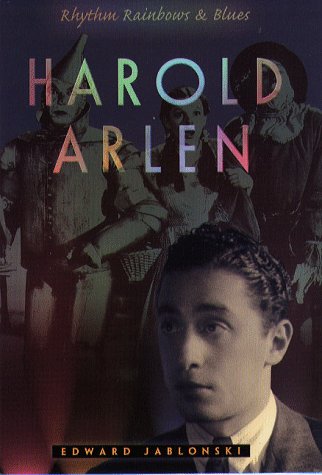 Harold Arlen (1905-1986) composed some of America's most enduring popular songs, including "Over the Rainbow," "Stormy Weather," "Get Flappy, "The Man That Got Away," and "Come Rain or Come Shine." Rooted in the traditions of jazz and the blues, his innovative music is still widely performed today by artists as diverse as Tony Bennett, Willie Nelson, and Ray Charles.
This engaging biography of Harold Arlen charts the course of his brilliant career, from band leader in his native Buffalo, New York, to songwriter and vocalist in vaudeville, to composer of Broadway musicals and revues at Harlem's Cotton Club, to writer of the everlasting music in The Wizard of Oz and other films. Drawing on a treasure trove of family documents and memorabilia, Edward Jablonski vividly describes Arlen's life, including his loving but troubled marriage to Anya, the strained relationship with his father and brother, his alcoholism and illnesses, and his friendship with Marlene Dietrich. Populated with such greats as Johnny Mercer, George and Ira Gershwin, E. Y. Harburg, Bert Lahr, and Judy Garland, the book also captures the spirit of Arlen's times and conveys a sense of the inner workings of the music business.

Edward Jablonski is the author of Alan Jay Lerner: A Biography, The Gershwin Years: George and Ira, Irving Berlin: A Biography, and many other books. His articles on music and musicians have appeared in American Record Guide, Saturday Review, Stereo Review, and the New York Times. He lives in New York City.

An efficacious reconsideration of a songwriter whose career exemplified the cross-pollination of black and white popular music. Everybody knows Arlen's songs (``Get Happy,'' ``Stormy Weather,'' ``Over the Rainbow''), but heretofore his story has been clumped with those of other show-tune composers. Born Hyman Arluck in 1905 to an Orthodox Jewish couple in Buffalo, New York, his early musical experiences were in the world of his father, a respected cantor. But he was electrified by Tin Pan Alley rags, which led him back to more authentic blues sources like Bessie Smith and Louis Armstrong. (A.a nifty passage hints at the correspondences between cantorial music and the aching blue notes in jazz). Arlen's career writing for the Cotton Club revues started when he met lyricist Ted Koehler. Arlen wasn't patrician, and black musicians and dancers liked him. His music was played by the Ellington and Calloway bands, and his songs became street hits. By the mid-'30s, that era ended abruptly, and he turned to Broadway and Hollywood, but mostly the latter, in a Faustian bargain for better pay and concomitant obscurity. His collaborations with Yip Harburg and Johnny Mercer stood out, and by the rock-'n'-roll era, he had made it to grand-old-man status as a composer of unusually winding melodies rooted in the blues. He had also slid into depression with a thunk: His relationship with his wife, Anya, became nearly nonexistent, and she died in 1970 after long suffering from a barely treated neurological illness; Arlen's last two decades were often dark and solitary. Veteran author Jablonski (Alan Jay Lerner, 1996, etc.), who had family cooperation and access to many personal files, reestablishes himself in these tricky passages as a reliable chronicler of American songwriters. Though at times overconsiderate (the subject remains unnecessarily saintly through some questionably racist musicals, dalliances with other women, etc.), this definitive book draws Arlen with complexity and clarity. (illustrations, not seen) -- Copyright ©1996, Kirkus Associates, LP. All rights reserved.