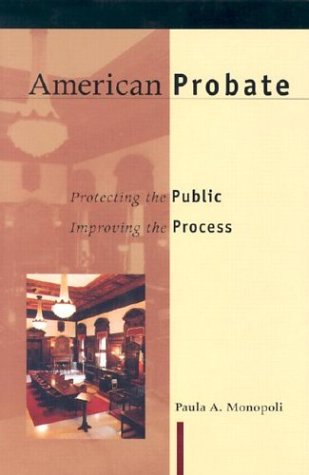 New Hampshire judge and probate attorney John Fairbanks, a court-appointed executor and trustee, stole thousands of dollars from the estates of his trusting elderly clients. Successful Virginia lawyer David Murray misappropriated nearly four million dollars from estates entrusted to him in one of the largest financial swindles by a lawyer in U.S. history. Enterprising attorney James Gundeson drafted wills and living trusts for many residents of Leisure World in Orange County, California, who named him the sole trustee and major beneficiary.
These are just some of the cases examined by Paula A. Monopoli to illustrate the unsettling prevalence of fraud and abuse inherent in American probate law. Probate courts are intended to provide a vehicle for the orderly disposition of property after death, to balance the interests of creditors, the government, and heirs, and to protect the rights of the elderly and others with special needs. In this insightful work, Monopoli shows how an array of flaws in the system allows corrupt and unethical lawyers to take advantage of the nation's most vulnerable citizens. She delves into such subjects as the history and purpose of probate, procedural complexities, lack of regulatory oversight, inadequate judicial resources, and the growth of non-probate alternatives, concluding with a blueprint for reform that emphasizes deterrence, detection, and compensation for the victims.

Buy Used
Condition: As New
Pages are clean and are not marred... Learn more about this copy

Book Description Northeastern University Press, 2003. Hardcover. Condition: As New. No Jacket. Pages are clean and are not marred by notes or folds of any kind. ~ ThriftBooks: Read More, Spend Less. Seller Inventory # G1555535720I2N00