Items related to Tank Tactics: From Normandy to Lorraine (Art of War)

Tank Tactics: From Normandy to Lorraine (Art of War) 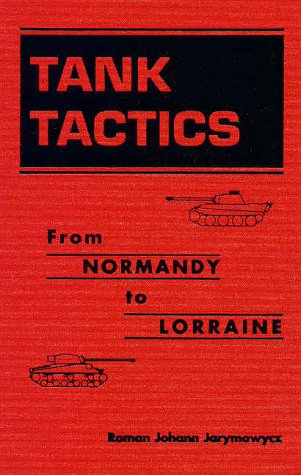 Now Dean of the Canadian Militia Staff College in Kingston, Austrian-born Jarymowycz explains cavalry's status and raison d'etre within the evolution of armor as the essence of maneuver and creativity on the battlefield, and examines the doctrinal evolution of US and Canadian armor. He concludes that though the two countries have much in common, their armies have evolved separately. Focusing mostly on battles in France during 1944, he begins by reviewing doctrine during the interwar period, 1918-30. Annotation c. Book News, Inc., Portland, OR (booknews.com)

Roman Jarymowycz, a retired Canadian Army officer, holds a PhD in military history and has taught at the Canadian Land Force Command and Staff College and the Royal Military College of Canada. He is also the author of Cavalry from Hoof to Track (978-0-275-98726-8). He lives in Canada.

2. Tank Tactics From Normandy To Lorraine

3. Tank Tactics: From Normandy to Lorraine

Book Description Lynne Rienner Publishers Inc. Hardback. Condition: New. New copy - Usually dispatched within 4 working days. This work is an operational critique of the art of war as practiced by U.S. and Canadian tank commanders in France in 1944, it also traces the evolution of North American armoured doctrine. Battle performance reviews, interrogation reports, diaries and technical evaluations are all drawn upon. Seller Inventory # B9781555879501

Shipping: US$ 16.30
From United Kingdom to U.S.A.
Destination, rates & speeds

4. Tank Tactics From Normandy To Lorraine

Shipping: US$ 34.11
From United Kingdom to U.S.A.
Destination, rates & speeds

6. Tank Tactics: From Normandy to Lorraine

Shipping: US$ 47.75
From United Kingdom to U.S.A.
Destination, rates & speeds