Items related to Education and Ecstasy 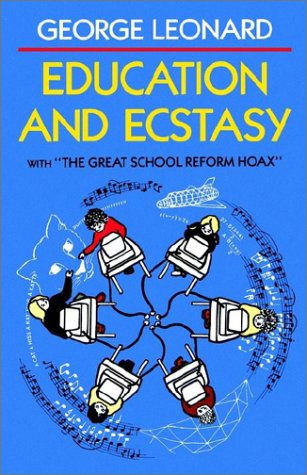 Education and Ecstasy, by George Leonard, was originally written as a call for reform in America's school systems. Published in the Sixties, and then revised in the Eighties, this book reveals the deep-rooted structural problems in American schools-problems which still plague us. Leonard proposes that long school days and tedious homework are not ways to encourage learning; that teachers are overworked and underpaid. He proposes ways to integrate new methods of teaching that are still valuable and applicable today.

Review:
“George Leonard has a deep reverence for the innate creativity of the human animal and has articulated with a poet’s passion the mutilation and death of that creativity in the environment called school.”
—Washington Post

“Education and Ecstasy is perhaps the most important book on schools, their problems, and their potential written in this generation. It is as exciting a discovery as you are likely to make between book covers this year.”
—San Francisco Examiner

“Highly literate, immensely readable. Anyone who thinks about education can never again think about it in the same way after reading Mr. Leonard.”
—Boston Globe

Education and Ecstasy (With the Great School Reform Hoax)