Items related to The Tradition 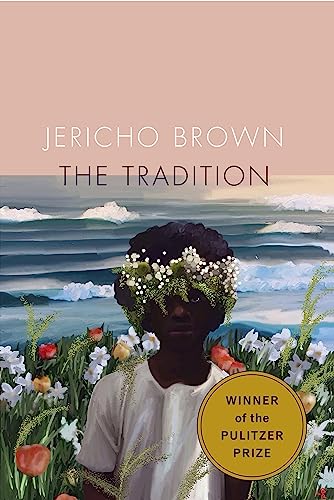 Finalist for the 2019 National Book Award

"By some literary magic―no, it's precision, and honesty―Brown manages to bestow upon even the most public of subjects the most intimate and personal stakes."―Craig Morgan Teicher, “'I Reject Walls': A 2019 Poetry Preview” for NPR

“A relentless dismantling of identity, a difficult jewel of a poem.“―Rita Dove, in her introduction to Jericho Brown’s “Dark” (featured in the New York Times Magazine in January 2019)

“Winner of a Whiting Award and a Guggenheim Fellowship, Brown's hard-won lyricism finds fire (and idyll) in the intersection of politics and love for queer Black men.”―O, The Oprah Magazine

“The poems of The Tradition, Brown’s third collection, are at turns tender and vulnerable, severe and riveting.” ―Los Angeles Review of Books

Named a Lit Hub “Most Anticipated Book of 2019”

Jericho Brown’s daring new book The Tradition details the normalization of evil and its history at the intersection of the past and the personal. Brown’s poetic concerns are both broad and intimate, and at their very core a distillation of the incredibly human: What is safety? Who is this nation? Where does freedom truly lie? Brown makes mythical pastorals to question the terrors to which we’ve become accustomed, and to celebrate how we survive. Poems of fatherhood, legacy, blackness, queerness, worship, and trauma are propelled into stunning clarity by Brown’s mastery, and his invention of the duplex―a combination of the sonnet, the ghazal, and the blues―is testament to his formal skill. The Tradition is a cutting and necessary collection, relentless in its quest for survival while reveling in a celebration of contradiction.

Jericho Brown worked as the speechwriter for the Mayor of New Orleans before earning his PhD in Creative Writing and Literature from the University of Houston. He is the recipient of the Whiting Writers Award and fellowships from the National Endowment for the Arts, the Radcliffe Institute at Harvard University, the Bread Loaf Writers' Conference, and the Krakow Poetry Seminar in Poland. His first book, Please (New Issues), won the American Book Award. His second book, The New Testament, won won the Anisfield-Wolf Book Award and was named one of the best of the year by Library Journal, Coldfront, and the Academy of American Poets; the collection was also nominated for the NAACP award for poetry and made The Believer’s top 5 Books of the Year. Brown is the director of the Creative Writing Program at Emory University and lives in Atlanta, Georgia.

THE MICROSCOPES
Heavy and expensive, hard and black

With bits of chrome for points of pride, they looked

Like baby cannons, the real children of war, and I

Hated them for that, for what our teacher said

They could do, and then I hated them

For what they did when we gave up

On stealing looks at each other’s bodies

Our actual selves taken down to a cell

Then blown back up again, every atomic thing

About a piece of my coiled hair on one slide

Just as unimportant as anyone else’s

Growing in that science

Class where I learned what little difference

God saw if God saw me. It was the start of one fear,

A puny one not much worth mentioning,

But, by certain grace, lost when I reached for it

To stab someone I secretly loved.

Through those tight, locker-lined corridors shoving some

Excuse me, more an insult than a battle. No large loss.

Not at all. Nothing necessary to study

Or recall. No fighting in the hall

On the way to an American history exam

Education I rode the bus to get. I can’t remember

The exact date or

Grade, but I know when I began ignoring slight alarms

That move others to charge or retreat. I’m a kind

Of camouflage. I never let on when I’m scared

Of conflicts so old they seem to amount

To nothing―dust particles left behind really―

Or like the most recent name of an occupied territory

I imagine you imagine when you see

A white woman walking with a speck like me.
RIDDLE
We do not recognize the body

Of Emmett Till. We do not know

The boy's name nor the sound

Of his mother wailing. We have

We do not know the history

Of this nation in ourselves. We

Do not know the history of our-

Selves on this planet because

We do not have to know what

We believe we own. We believe

We own your bodies but have no

Use for your tears. We destroy

The body that refuses use. We use

Maps we did not draw. We see

So land there. We love land so

Long as we can take it. Shhh. We

Can’t take that sound. What is

A mother wailing? We do not

Recognize music until we can

Sell it. We sell what cannot be

Bought. We buy silence. Let us

Help you. How much does it cost

To hold your breath underwater?

Wait. Wait. What are we? What?

What on Earth are we? What?
DARK
I am sick of your sadness,

Your books. Sick of you

All so I forget how sick

I am. I'm sick of your good looks,

Your debates, your concern, your

Determination to keep your butt

Plump, the little money you earn.

I'm sick of you saying no when yes is easy

As a young man, bored with you

Saying yes to every request

Though you're as tired as anyone else yet

Consumed with a single

Of your hurting. I see that

You’re blue. You may be ugly,

But that ain’t new.

Everyone you know is

Just as cracked. Everyone you love is

As dark, or at least as black.

The Tradition (Paperback or Softback)