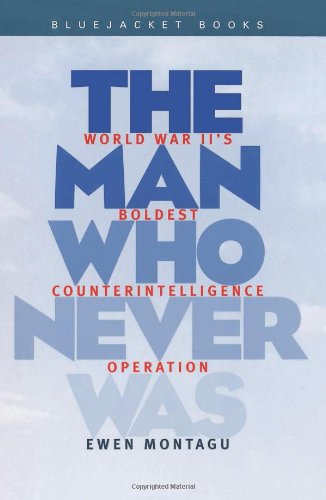 As plans got under way for the Allied invasion of Sicily in June 1943, British counter-intelligence agent Ewen Montagu masterminded a scheme to mislead the Germans into thinking the next landing would occur in Greece. The innovative plot was so successful that the Germans moved some of their forces away from Sicily, and two weeks into the real invasion still expected an attack in Greece. This extraordinary operation called for a dead body, dressed as a Royal Marine officer and carrying false information about a pending Allied invasion of Greece, to wash up on a Spanish shore near the town of a known Nazi agent.

Agent Montagu tells the story as only an insider could, offering fascinating details of the difficulties involved--especially in creating a persona for a man who never was--and of his profession as a spy and the risks involved in mounting such a complex operation. Failure could have had devastating results. Success, however, brought a decided change in the course of the war.

Ewen Montagu ran the counterespionage sub-branch of the naval intelligence division at the British Admiralty. He later became judge advocate of the fleet and died in 1985.

"...a splendid read about the most curious scheme of World War II." -- Nautical Magazine, February 2004