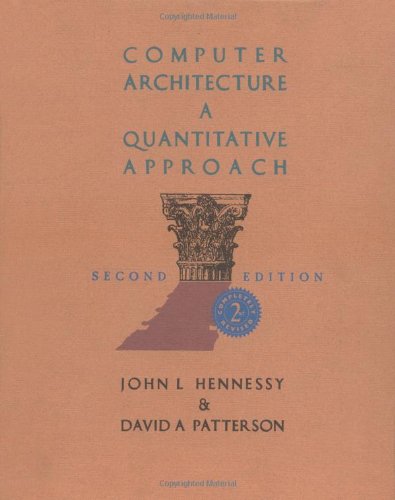 "Once in a great while, a landmark computer-science book is published. Computer Architecture: A Quantitative Approach, Second Edition, is such a book. In an era of fluff computer books that are, quite properly, remaindered within weeks of publication, this book will stand the test of time, becoming lovingly dog-eared in the hands of anyone who designs computers or has concerns about the performance of computer programs." - Robert Bernecky, Dr. Dobb's Journal, April 1998

Computer Architecture: A Quantitative Approach was the first book to focus on computer architecture as a modern science. Its publication in 1990 inspired a new approach to studying and understanding computer design. Now, the second edition explores the next generation of architectures and design techniques with view to the future.

A basis for modern computer architecture

As the authors explain in their preface to the Second Edition, computer architecture itself has undergone significant change since 1990. Concentrating on currently predominant and emerging commercial systems, the Hennessy and Patterson have prepared entirely new chapters covering additional advanced topics:

This book continues the style of the first edition, with revised sections on Fallacies and Pitfalls, Putting It All Together and Historical Perspective, and contains entirely new sections on Crosscutting Issues. The focus on fundamental techniques for designing real machines and the attention to maximizing cost/performance are crucial to both students and working professionals. Anyone involved in building computers, from palmtops to supercomputers, will profit from the expertise offered by Hennessy and Patterson.

An excellent successor to Hennessy and Patterson's Computer Organization and Design, this book presents computer architecture and design as something quantitative that can be studied in the context of real running systems rather than in an abstract format. The concepts are again grounded in real machine architectures and many of the examples are contemporary architectures, such as PowerPC chips and Intel 80x86. Computer Architecture follows the same outline as its predecessor, but covers information in more depth, moving rapidly from introductory discussions to issues just shy of computer design research. The format again includes an excellent mix of exercises and historical background. This book is recommended for people with some experience in digital design--or people who have read and understood the authors' first text.

John L. Hennessy is the president of Stanford University, where he has been a member of the faculty since 1977 in the departments of electrical engineering and computer science. Hennessy is a fellow of the IEEE and the ACM, a member of the National Academy of Engineering, the National Academy of Science, the American Academy of Arts and Sciences, and the Spanish Royal Academy of Engineering. He received the 2001 Eckert-Mauchly Award for his contributions to RISC technology, the 2001 Seymour Cray Computer Engineering Award, and shared the John von Neumann award in 2000 with David Patterson. After completing the project in 1984, he took a one-year leave from the university to co-found MIPS Computer Systems, which developed one of the first commercial RISC microprocessors. After being acquired by Silicon Graphics in 1991, MIPS Technologies became an independent company in 1998, focusing on microprocessors for the embedded marketplace. As of 2004, over 300 million MIPS microprocessors have been shipped in devices ranging from video games and palmtop computers to laser printers and network switches. Hennessy's more recent research at Stanford focuses on the area of designing and exploiting multiprocessors. He helped lead the design of the DASH multiprocessor architecture, the first distributed shared-memory multiprocessors supporting cache coherency, and the basis for several commercial multiprocessor designs, including the Silicon Graphics Origin multiprocessors. Since becoming president of Stanford, revising and updating this text and the more advanced Computer Architecture: A Quantitative Approach has become a primary form of recreation and relaxation.

David A. Patterson was the first in his family to graduate from college (1969 A.B UCLA), and he enjoyed it so much that he didn't stop until a PhD, (1976 UCLA). After 4 years developing a wafer-scale computer at Hughes Aircraft, he joined U.C. Berkeley in 1977. He spent 1979 at DEC working on the VAX minicomputer. He and colleagues later developed the Reduced Instruction Set Computer (RISC). By joining forces with IBM's 801 and Stanford's MIPS projects, RISC became widespread. In 1984 Sun Microsystems recruited him to start the SPARC architecture. In 1987, Patterson and colleagues wondered if tried building dependable storage systems from the new PC disks. This led to the popular Redundant Array of Inexpensive Disks (RAID). He spent 1989 working on the CM-5 supercomputer. Patterson and colleagues later tried building a supercomputer using standard desktop computers and switches. The resulting Network of Workstations (NOW) project led to cluster technology used by many startups. He is now working on the Recovery Oriented Computing (ROC) project. In the past, he served as Chair of Berkeley's CS Division, Chair and CRA. He is currently serving on the IT advisory committee to the U.S. President and has just been elected President of the ACM. All this resulted in 150 papers, 5 books, and the following honors, some shared with friends: election to the National Academy of Engineering; from the University of California: Outstanding Alumnus Award (UCLA Computer Science Department), McEntyre Award for Excellence in Teaching (Berkeley Computer Science), Distinguished Teaching Award (Berkeley); from ACM: fellow, SIGMOD Test of Time Award, Karlstrom Outstanding Educator Award; from IEEE: fellow, Johnson Information Storage Award, Undergraduate Teaching Award, Mulligan Education Medal, and von Neumann Medal.