Items related to Discovering the Unknown Landscape: A History Of America'...

Discovering the Unknown Landscape: A History Of America's Wetlands 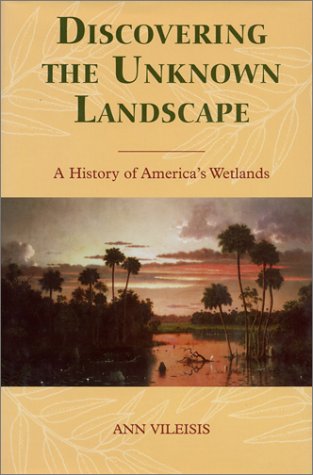 A valuable history of America's treatment of its wetlands from Colonial times to the present day traces the various influences--political, cultural, economic, and aesthetic--on the way Americans have viewed, used, and often destroyed the country's wetlands. IP.

"...a major addition to the literature of American environmental history." (Roderick Nash author of Wilderness and the American Mind)

"Though I have focused my entire professional career on wetlands, this book provided me with new information, insight, and appreciation of our wetlands resource. There is no student of wetlands that cannot benefit from reading this book." (Bill O. Wilen Project Leader, National Wetlands Inventory)

"Vileisis gives us the cultural history of America's wetlands in intricate detail, from Henry David Thoreau, neck deep in a cranberry bog, gaining 'a sense of the richness of life,' to senators' jockeys over the Swamp Land Act in 1849." (Smithsonian)

" ...a fine survey of changing American attitudes towards wetlands, and of the struggles that have been fought for their protection. It will become a standard work on its subject." (William Cronon, University of Wisconsin, author of "Nature's Metropolis")

"A rare book that goes beyond description to contribute to our understanding of the land and of American culture." (Chicago Free Press)

"A simply first-rate piece of environmental history—comprehensive and careful in its research, well reasoned in its analysis, and exceptionally well-written. Vileisis has provided a model as to how environmental history can markedly enhance how we understand the environmental present and how we think about the future." (Samuel P. Hays Professor Emeritus of History, University of Pittsburgh)

"In this timely, well-documented work, environmental historian Vileisis explains the confusion and contention surrounding wetlands preservation in terms of the differing cultural values Americans have historically assigned to these problematic habitats. . . . From salt marshes of Colonial New England to the recent efforts to restore the Florida Everglades, Vileisis discusses not only the changes in common practices, laws, and regulations but also the shifts in cultural and social attitudes. Highly recommended. . . . " (Library Journal)

Whether seen as "bugs and mud" or as breeding grounds for countless species of fish, birds and other organisms, wetlands have borne much of the brunt of our development as a nation, argues environmental historian and naturalist Vileisis. Here, her painstaking research into the changing ways people thought, wrote about and thereby legislated wetlands throughout the many stages of the country's development makes a compelling case for their central role in our history. Vileisis takes us through our many uses of wetlands resources, from the filling of Boston's marshes, early rice-milling dams and the travels in search of "`rare and Useful productions'" of 18th-century botanist William Bartram, to the "great Florida land giveaway" of the 1870s and the over-logging of Southern swamps. Nearly two thirds of the book deals with our own century, including the formation of the Army Corp of Engineers (and their rise to power in controlling wetlands alteration) and the enactment of the National Environmental Policy Act in the late 1960s, as well as the expanding role of concerned citizens in policy making after WWII. Along the way, Vileisis shows how America's explosive population growth and subsequent housing development decimated the habitats of waterfowl as well as those of other species. In her fine book, Vileisis provides a comprehensive account of a not so slow-motion natural disaster. Illustrations.

1. Discovering the Unknown Landscape: A History Of America's Wetlands

3. Discovering the Unknown Landscape: A History Of America's Wetlands

4. Discovering the Unknown Landscape: A History Of America's Wetlands

5. Discovering the Unknown Landscape: A History Of America's Wetlands