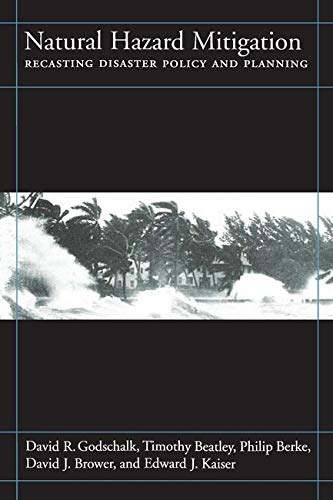 The first half of the 1990s saw the largest and most costly floods, hurricanes, and earthquakes in the history of the United States. While natural hazards cannot be prevented, their human impacts can be greatly reduced through advance action that mitigates risks and reduces vulnerability.Natural Hazard Mitigation describes and analyzes the way that hazard mitigation has been carried out in the U.S. under our national disaster law, the Robert T. Stafford Disaster Relief and Emergency Assistance Act. It is the first systematic study of the complete intergovernmental system for natural hazard mitigation, including its major elements and the linkages among them.The book: analyzes the effectiveness of the Stafford Act and investigates what is contained in state hazard mitigation plans required by the Act studies how federal hazard mitigation funds have been spent explores what goes into decision making following a major disaster looks at how government mitigation officials rate the effectiveness of the mitigation system suggests changes that could help solve the widely recognized problems with current methods of coping with disasters.Damages from natural disasters are reaching catastrophic proportions, making natural hazard mitigation an important national policy issue. The findings and recommendations presented in this volume should help to strengthen natural hazard mitigation policy and practice, thereby serving to reduce drains on the federal treasury that pay for preventable recovery and relief costs, and to spare residents in areas hit by natural disasters undue suffering and expense. It is an informative and eye-opening study for planners, policymakers, students of planning and geography, and professionals working for government agencies that deal with natural hazards.

Timothy Beatley is the Teresa Heinz Professor of Sustainable Communities at the School of Architecture at the University of Virginia, where he has taught for over twenty-five years. His primary teaching and research interests are in environmental planning and policy, with special emphasis on coastal and natural hazards planning, environmental values and ethics, and biodiversity conservation. He has published extensively in these areas, including the following books: Ethical Land Use; Habitat Conservation Planning: Endangered Species and Urban Growth; Natural Hazard Mitigation; and An Introduction to Coastal Zone Management. In recent years much of his research and writing has been focused on the subject of sustainable communities, and creative strategies by which cities and towns can reduce their ecological footprints, while at the same time becoming more livable and equitable places. His books that explore these issues include Biophilic Cities, Resilient Cities, and Green Urbanism (Island Press).

Shipping: US$ 20.85
From United Kingdom to U.S.A.
Destination, rates & speeds