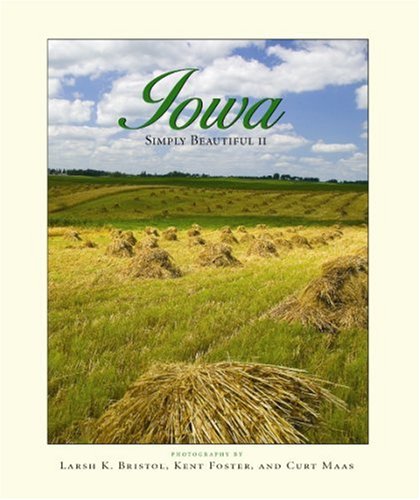 Come home to Iowa once again with this second collection of photographs from Bristol and Maas, this time joined by Kent Foster. These are scenes of hard work and hard play in a land with four strong seasons; images of past history and cultures; and the natural beauty of all the Iowa landscapes between the Mississippi and the Missouri. If Iowa is home, you will find a family album here. If not, you will know from these photographs that visitors are always welcome in Iowa.

Larsh K. Bristol earned a BA in journalism from the University of Wyoming, worked in advertising and photojournalism before returning to his home state of Iowa. He was irresistibly drawn back to the streams, valleys, wooded hills, and people of the magnificent Mississippi River Valley. Years as a freelance photographer in the upper Midwest reaffirmed his belief that the light and landscape of Iowa were as magnificent as any in the United States. In August 2006, Larsh Bristol was killed in an automobile accident while traveling one of the rural northeastern Iowa river roads he so loved. Curt Maas Originally from Fort Dodge, Curt Maas lived in Iowa most of his life. He was an honor graduate of the Brook?s Institute of Photography in Santa Barbara and traveled the U.S. and the world producing work for a variety of agricultural companies, advertising agencies, and government institutions. His work was also featured in many magazines, documentaries, and books, including Iowa Impressions, Iowa Simply Beautiful, Iowa: A Celebration of Land, People, and Purpose, and Country USA: 24 Hours in Rural America. Curt Maas passed away on September 7, 2005. Behind the camera for more than 25 years, Foster has published his work at the national and international levels in calendars, journals, magazines and books. Since returning to his native Iowa, he has worked with the Iowa Department of Tourism and Iowa Travel Guide.