Items related to Too Much Talk: A West African Folktale

Shelf Medearis, Angela Too Much Talk: A West African Folktale

Too Much Talk: A West African Folktale 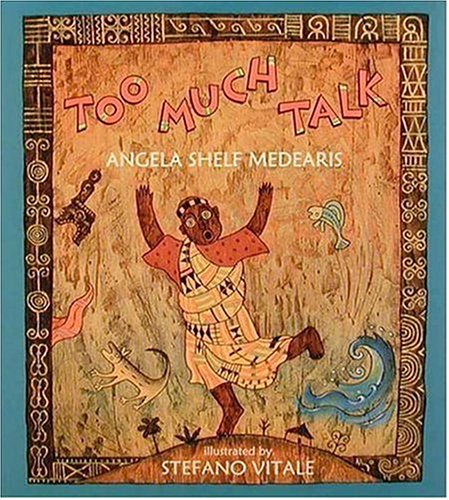 A brightly illustrated retelling of a folktale from Ghana concerns the fun that starts when everything starts talking, including the farmer's yams, the fisherman's fish, and the weaver's cloth.

PreSchool-Grade 3-In this retelling of a Ghanian folktale, a yam talks to the farmer digging it up, as does his dog. Frightened, the man shrieks "Aiyeee!' and runs away. He encounters a fisher, a weaver, and a swimmer, each of whom scoffs at his collective report until addressed by, respectively, a fish, some cloth, and the water. The four take their tale to the chief, who dismisses them as fools-until his throne talks. Medearis's narrative is especially well suited to reading aloud. The simple, repetitive language makes it a natural choice for story time, and the text provides ample opportunities for participation. The tale is attributed to Ghana; no further sources are given. Vitale's oil paint on wood illustrations are vibrant, lively, and attractive, reflecting his interest in African art. He copies ritual masks for the heads of his characters, an intriguing and original idea that works well when the heads are disembodied, but less successful when they are attached to human figures, creating an unsettling impression of caricature. He incorporates the art of several different African tribes into what is essentially an Ashanti story. The effect is similar to what would result if one took a Greek god and a Norse god and put them in Celtic dress. It's unfortunate that there's no source note recognizing the different elements combined in the paintings. This is a good effort, but basic information is missing.
Donna L. Scanlon, Lancaster County Library, PA
Copyright 1995 Reed Business Information, Inc.

Ages 4^-7. Italian illustrator Vitale, who attracted notice with his beautiful paintings on wood for When the Wind Stops , uses a similiar style to illustrate an appealing West African folktale. When the yam he is digging up talks back, the farmer can't believe it. His fisherman neighbor is equally skeptical until his catch gives him some lip. The pattern is repeated with other members of the community. However, when the group tells its collective tale to the chief, he dismisses it until he is taught a lesson by his talking throne. Despite an ending that is a little too brisk, this brief, cumulative tale has a simple style, strong rhythms and repetition, and zesty humor. Surrounded by patterned borders, the subtly colored spreads have stylized figures that evoke the region and flowing lines that echo the cadence of the text. Hints for telling the tale appear on the back dust jacket. Julie Corsaro

1. Too Much Talk: A West African Folktale

2. Too Much Talk: A West African Folktale

3. Too Much Talk: A West African Folktale

4. Too Much Talk: A West African Folktale

5. TOO MUCH TALK: A WEST AFRICAN FO