Items related to The South Was Right!

The South Was Right! 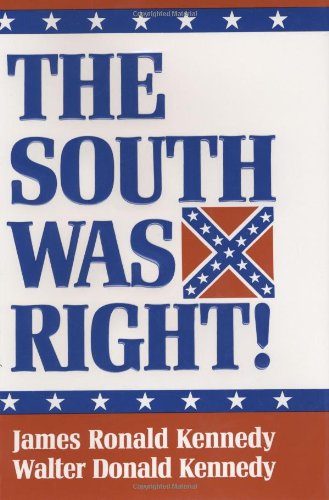 An authoritative and documented study of the mythology behind Civil War history, clearly exhibiting how the South was an independent country invaded, captured, and still occupied by a vicious aggressor.

History is written by the victor, and that of the American Civil War is no different. The idea that Southerners would die in order for only 6 percent of the population to own slaves just does not pass the "sniff" test.
The myth of a freedom-loving North and an evil, slave-holding South is just one that is exposed in The South Was Right! The idea of big government not only was politicized through the issue of slavery but also was made inevitable in the South's defeat. Because of the surrender, "we the people" of the United States are no longer sovereign. Today, a supreme federal government dictates what rights the states can exercise.
After the Union victory, a campaign of ongoing cultural cleansing has been waged to keep the South in its assigned place in American history. While many ethnic, religious, and cultural groups are celebrated, Southern heritage often is viewed with a wary eye.
Predicted to be "one of the most controversial books of the decade" when first published, The South Was Right! lives up to that forecast. This book is filled with documented evidence supporting all of the authors' claims and paints a frighteningly realistic picture of a captured people, their struggle to preserve their heritage, and their right to exist as a distinct culture and an independent country.

Descendants of Civil War soldiers, twin brothers James Ronald Kennedy and Walter Donald Kennedy are life members of the Sons of Confederate Veterans (SCV) and are active in other organizations promoting limited government and American liberty. They are frequent speakers at conferences and on radio and television programs.
In addition to The South Was Right!, the Kennedy twins have written numerous Pelican titles, including Why Not Freedom!: America's Revolt Against Big Government, Was Jefferson Davis Right?, and Nullifying Tyranny: Creating Moral Communities in an Immoral Society. Ronald, a resident of Mandeville, Louisiana, also has written Reclaiming Liberty. Donald, a resident of Downsville, Louisiana, has written Myths of American Slavery and, with Al Benson, Lincoln's Marxists, both of which are published by Pelican. The Kennedy twins are recipients of the Distinguished Service Medal of the National Sons of Confederate Veterans (SCV), the Governor Thomas Overton Moore Award from SCV's Louisiana Division, and the Southern Heritage Award from the Southern Heritage Society. In addition, they have been honored with numerous other awards for their efforts in defending the traditional view of the South and American liberty.

"I was stunned by the scholarly material presented to show the Union account (and thus posterity's) of the 'Civil War' to be but a myth, a lie, a masterful piece of propaganda."
—Critical Review

In their best-selling book, The South Was Right!, the Kennedy brothers dispel many commonly held beliefs about the Civil War. Their well-researched arguments demonstrate the South's many legitimate complaints during the antebellum period, including unfair taxation and unequal constitutional rights. The victorious North rewrote history to justify its invasion of the South, which was legally and culturally a separate, independent country. Furthermore, the Kennedys explain how lingering myths about the Civil War are still being used to discredit and exploit former Confederate states. The authors' bold ideas and rigorous documentation will change the way readers think about the Civil War.

The South Was Right!, currently in its tenth printing, has sold more than 85,000 copies in hardcover.