Items related to Perl in a Nutshell

Perl in a Nutshell 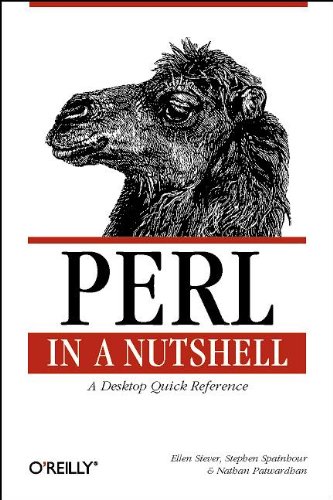 Perl in a Nutshell is a comprehensive reference guide to the Perl programming language. This book covers all the core features of the language. It ranges widely through the Perl programmer's universe, gathering together in convenient form a wealth of information about Perl itself and its application to CGI scripts, network programming, database interaction, and graphical user interfaces. It also gives detailed coverage about using Perl within a Win32 environment.This book assembles more information about the language in one place than any other reference work. Here are just some of the topics covered in the book:

As part of the successful "in a Nutshell" series of books from O'Reilly & Associates, Perl in a Nutshell is for readers who want a single reference for all their needs.

Perl in a Nutshell strives to be a perfect set of socket tools for the active Perl programmer. By and large, it succeeds, providing endless and well-thought-out lists and tables on the language's modules, flags, and extensions. The authors briefly address basic learner's questions--such as the difference between a hash and an array--but these concepts are not the purpose of the book. (Those new to Perl would be better off with others in the O'Reilly Perl series, such as Learning Perl, while programmers making the switch to Perl can pick up the nuances of the language with Programming Perl.) This book is pure Perl reference, briefly covering Perl/Tk (for GUI Perl programs on Unix and Windows 95/NT) and Perl for Win 32.

The authors do start at the very beginning, and even in a self-described "desktop quick reference" find the time to comment on less urgent--but still interesting--Perl-related matters (like how to find online help amidst the "Perl culture"). The format of the book makes sections on topics such as Perl debugging easily understandable, illustrating how to make an interactive and timesaving environment.

Of particular convenience is the outstanding section on the standard Perl modules. A four-page "quick look" allows you to easily scan through short definitions of all the modules and find the entry you're looking for. An index with full definitions for each module follows, showing you how to use each module and providing a more in-depth explanation (and often, examples). Perl in a Nutshell concludes--as you might expect--with an excellent and well-cross-referenced index. --Jennifer Buckendorff

Ellen Siever is a writer and editor specializing in Linux and other open source topics. In addition to Linux in a Nutshell, she co-authored Perl in a Nutshell. She is a long-time Linux and Unix user, and was a programmer for many years until she decided that writing about computers was more fun.

Stephen Spainhour co-authored Webmaster in a Nutshell, Perl in a Nutshell, 1st Edition, and contributed to many other OReilly titles. He is an avid fan of professional tennis, and when hes not checking for tennis scores on the Web, he enjoys cooking, electronic music, troubleshooting his home-built PC, and watching too much television.

1. PERL IN A NUTSHELL