Items related to Voice Male: The Untold Story of the Pro-Feminist Men's...

Rob A. Okun Voice Male: The Untold Story of the Pro-Feminist Men's Movement

Voice Male: The Untold Story of the Pro-Feminist Men's Movement 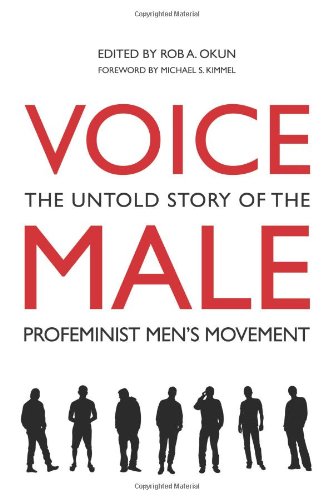 Here is a stunning new book that succeeds in doing nothing less than chronicling the social transformation of masculinity over a three-decade span. Through thematically arranged essays by leading experts, Voice Male illustrates how a growing movement of men is redefining masculinity. In this collection, Rob Okun directs a chorus of pro-feminist voices, introducing readers to men examining contemporary manhood from a variety of perspectives: from overcoming violence, fatherhood, and navigating life as a man of color, a gay man, or a boy on the journey to manhood. It also provides a critical forum for both male survivors and GBTQ men to speak out. This inspired book is evidence of a new direction for men, brightly illuminating what's around the bend on the path to gender justice.

Rob A. Okun is a widely published writer addressing issues related to men and masculinity. Editor of Voice Male magazine, he is former executive director of the Men s Resource Center for Change, one of the oldest men s centers in the U.S. A member of the board of the New England Center for Women in Transition, he maintains a psychotherapy practice in Amherst, Massachusetts.

"Finally a book for women to feel hopeful about men. Longtime editor of Voice Male magazine Rob Okun and a chorus of contributing writers chronicle a movement of men standing with women in the struggle to end violence against women and girls. But this brave book does more than that, revealing an emerging new man culture where men are reclaiming their tears and their hearts as they join women in creating a world where we are all safe and free." --Eve Ensler, playwright of The Vagina Monologues; author of I Am an Emotional Creature and In the Body of the World.

"When our children and grandchildren ask us what men were doing when women were changing the world in the late 20th and early 21st centuries, we can tell them to pick up this book. Voice Male accomplishes what The New York Times and virtually every other mainstream media organization has regrettably failed to do: telling the story of men across class, race and sexual orientation who responded to feminism not with defensiveness and hostility, but with support, solidarity, and a recognition that all along part of the program was about transforming men s lives, relationships and health for the better. Voice Male deserves to take its place alongside such classics as Sisterhood is Powerful and The Feminist Papers as both a living document and a social history of these consequential times." --Jackson Katz, Ph.D., author of The Macho Paradox and creator of the award-winning film Tough Guise --.

Here are some 140 essays, memoirs, and poems from three decades of writings in the magazine of the same name, edited by Okun (former executive director, Men's Resource Center for Change), who edits the publication. Most of the selections are brief (one or two pages long), making it easy to read several at a sitting and to get a good idea of the wide-ranging interests and concerns of profeminist men. Both men and boys have a great deal to gain from adopting profeminist views, the writings indicate. Men, for instance, don t have to live by society s conventional masculine stereotypes; they don t always have to compete with other men, be in charge, and suppress their feeling or affections. And boys don t have to bully weaker boys (or girls) or be bullied themselves; they needn t resolve disputes with fistfights. They can cry when they re injured or when their feelings are hurt. Moreover, profeminist men and boys don t resort to physical or verbal abuse against women. In general, the pieces here argue that profeminist thinking is better for society as a whole. VERDICT: A very worthwhile introduction to the profeminist movement among men. It will reward both casual readers and serious students of the subject. --Library Journal December 2013

While this collection of articles from Voice Male magazine does not provide a substantial history of the profeminist men s movement, it does show glimpses of a way for men to live that is centered not on their masculinity, but on their humanity. Editor Okun now publishes Voice Male independently, but it began as the newsletter of the Men s Resource Center of Amherst, Mass., where he served as executive director, and that geographic focus remains in many of the articles. Readers unfamiliar with the movement may not know many of the authors, but a few, such as Jane Fonda, Mumia Abu-Jamal, and Eve Ensler will be widely recognized. Chapters run the gamut of issues related to men s identity, some of them dealing directly with men s relationships with women or support of the women s movement, while others address health, recovery from abuse, fatherhood, race, and GBTQ matters. Individual articles are generally strong, and vary from quite general discussions of men s responsibility to stop violence against women, to very specific anecdotes. By uniting these diverse topics into a single work, Okun shows that the stereotypical tough, uncaring masculine ideal is unhealthy for society. Readers interested in gender issues will appreciate the strength of the individual articles and the book s powerful message. --Publishers Weekly 11/25/13

1. Voice Male: The Untold Story of the Pro-Feminist Men's Movement

2. Voice Male: The Untold Story of the Pro-Feminist Men's Movement