Items related to Memoir on Pauperism 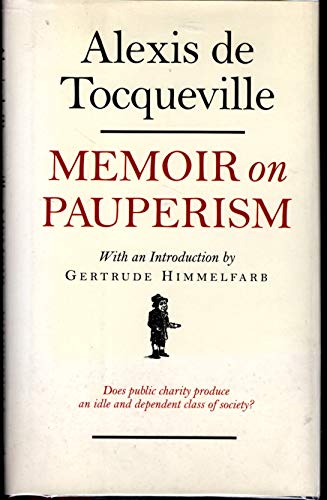 Immediately after completing the first volume of Democracy in America, Alexis de Tocqueville wrote his Memoir on Pauperism. It was inspired by a visit to England two years earlier and was surely in his mind while he was writing Democracy. In the "Memoir," Tocqueville seeks to understand why the most impoverished countries of Europe in his time have the fewest paupers, while the most opulent country, England, has the most. He finds that England’s public charity—possible because of its successful economy—has produced a pauper class: the unforeseen and unfortunate consequences of good intentions. By removing the necessity for work, public charity breeds other miseries. Here in book form for the first time, Tocqueville’s "Memoir" still resonates in our postindustrial society. As Gertrude Himmelfarb notes in her introduction, "We can see the shadow of our chronically dependent 'underclass’ in Tocqueville’s description of the pauper class.... We can also, today more than ever, appreciate Tocqueville’s criticism of public charity as a legal right—an 'entitlement,’ as we now say." This cogent Memoir on Pauperism is a notable contribution to the idea of civil society.

Alexis de Tocqueville’s most famous work is Democracy in America. Gertrude Himmelfarb’s most recent book is The De-Moralization of America.