Items related to Nancy and Plum 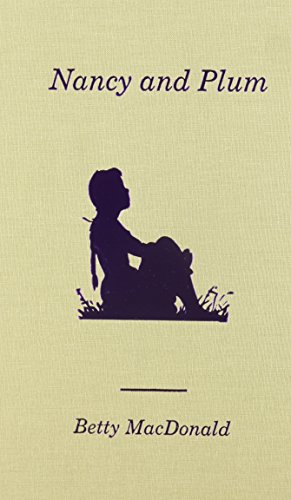 "Nancy and Plum" is a children's book written by the world famous author Betty McDonald, who wrote four popular "Mrs. Piggle Wiggle" children's books, and also the adult books, "The Egg & I", "Anybody Can Do Anything" and "Onion in the Stew".

"Nancy and Plum" was first published in 1952. It is a story Betty told her daughters, Joan and Anne, each night at bedtime, making it up as she went along. It is a delightful old fashioned Christmas story about two sisters, Nancy, 10 and Plum, 8, whose parents died in an accident. Their surviving relative is Uncle John, a wealthy bachelor with little patience or time for children. He puts the girls in Mrs. Monday's Boarding School in Heavenly Valley, persuaded by Mrs. Monday's promises and unctuous manner.

But Mrs. Monday is an ogre who pampers her niece, Maribelle, and persecutes the other girls in her custody.

Of the two sisters, Plum is the spunky one, leading Nancy on forays for food and initiating their running away. Plum like that more famous orphan, ,Annie, is brave, innovative and energetic.

There are lovely characters who are sympathetic and help the girls: Mr. and Mrs. Campbell, who find the girls on their farm and rescue them; Miss Waverly, the school teacher; Miss Appleby, the librarianl and Old Tom, the caretaker at the orphanage. For contrast their is Miss Gronk the Sunday school teacher, who shares the role of villianess with Mrs. Monday.

"Nancy and Plum" and "Mrs. Piggle Wiggle" were made into plays by the Seattle Children's Theater which were done exactly the way Betty would have wanted. They appealed to adults as well as children and are now being performed by other children's theaters throughout the United States.

Book Description Buccaneer Books, 1997. Hardcover. Condition: GOOD. Has little wear to the cover and pages. Contains some markings such as highlighting and writing. Seller Inventory # 1568490178_abe_gd

Book Description Buccaneer Books, 1997. Condition: Good. A+ Customer service! Satisfaction Guaranteed! Book is in Used-Good condition. Pages and cover are clean and intact. Used items may not include supplementary materials such as CDs or access codes. May show signs of minor shelf wear and contain limited notes and highlighting. Seller Inventory # 1568490178-2-4

Book Description Buccaneer Books. Hardcover. Condition: GOOD. Spine creases, wear to binding and pages from reading. May contain limited notes, underlining or highlighting that does affect the text. Possible ex library copy, will have the markings and stickers associated from the library. Accessories such as CD, codes, toys, may not be included. Seller Inventory # 3165998632

Book Description Buccaneer Books, 1997. Hardcover. Condition: Good. Connecting readers with great books since 1972. Used books may not include companion materials, some shelf wear, may contain highlighting/notes, may not include cdrom or access codes. Customer service is our top priority!. Seller Inventory # S_280503427