Items related to Mirrors: Stories of Almost Everyone

Mirrors: Stories of Almost Everyone 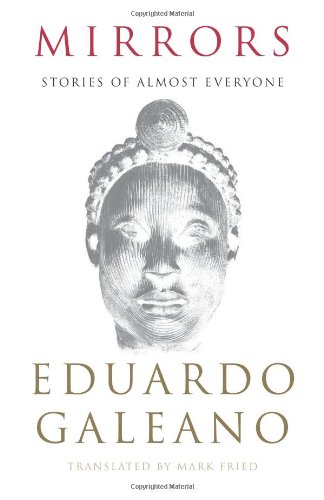 Throughout his career, Eduardo Galeano has turned our understanding of history and reality on its head. Isabelle Allende said his works invade the reader's mind, to persuade him or her to surrender to the charm of his writing and power of his idealism.”

Mirrors, Galeano's most ambitious project since Memory of Fire, is an unofficial history of the world seen through history's unseen, unheard, and forgotten. As Galeano notes: Official history has it that Vasco Núñez de Balboa was the first man to see, from a summit in Panama, the two oceans at once. Were the people who lived there blind??”

Recalling the lives of artists, writers, gods, and visionaries, from the Garden of Eden to twenty-first-century New York, of the black slaves who built the White House and the women erased by men's fears, and told in hundreds of kaleidoscopic vignettes, Mirrors is a magic mosaic of our humanity.

Eduardo Galeano’s works, which have been translated into twenty-eight languages, include Memory of Fire (three volumes); Open Veins of Latin America; Soccer in Sun and Shadow; Days and Nights of Love and War; The Book of Embraces; We Say No; Walking Words; Upside Down; and Voices of Time. Born in Montevideo, he lived in exile in Argentina and Spain for years before returning to Uruguay. He was the recipient of the first Lannan Prize for Cultural Freedom and the front-runner for Spain's esteemed Cervantes award.

*Starred Review* In his poetic nonfiction, Galeano performs the sort of extraordinary feats of compassion, artistry, and imagination achieved in fiction by his fellow visionary Latin American writers, especially Borges, García Márquez, and Bolaño. Galeano’s seminal works, most notably Memory of Fire (1988), have been enormously influential in both content and form, and now this historian of conscience, this humanely ironic commentator and dazzling storyteller, distills the entire wild pageant of human history into a radiant mosaic of pithy fables, essays, and portraits. Galeano circles the planet, tallying our triumphs and crimes from cave paintings to genocide, gathering myths, exposing lies, and reclaiming forgotten heroes. Origin stories are a favorite subject, both authentic and impishly improvised, as in “Origin of the World Trade Organization,” in which Zeus chooses Hermes to be the god of trade “because he was the best liar.” Galeano is particularly ardent in his parsing of the perpetual injustice and violence against women, the perversion of religion and the habit of war, the horrors of slavery, the evolution of science, and the pillaging of the earth. Themes and connecting patterns rise up like waves and carry forward flotillas of essays in this gorgeously fluid and caustic chronicle of the human condition. --Donna Seaman

1. Mirrors: Stories of Almost Everyone

2. Mirrors: Stories of Almost Everyone

4. Mirrors: Stories of Almost Everyone