Items related to Tuesdays with Morrie 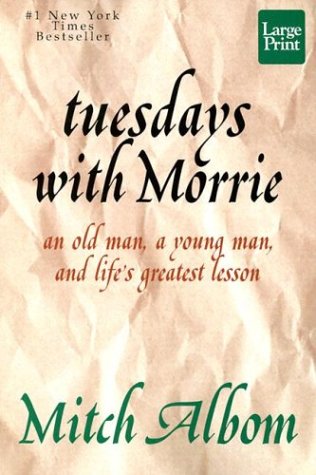 Maybe it was a grandparent, or a teacher, or a colleague.  Someone older, patient and wise, who understood you when you were young and searching, helped you see the world as a more profound place, gave you sound advice to help you make your way through it.

For Mitch Albom, that person was Morrie Schwartz, his college professor from nearly twenty years ago.

Maybe, like Mitch, you lost track of this mentor as you made your way, and the insights faded, and the world seemed colder.  Wouldn't you like to see that person again, ask the bigger questions that still haunt you, receive wisdom for your busy life today the way you once did when you were younger?

Mitch Albom had that second chance.  He rediscovered Morrie in the last months of the older man's life.  Knowing he was dying, Morrie visited with Mitch in his study every Tuesday, just as they used to back in college.  Their rekindled relationship turned into one final "class": lessons in how to live.

Tuesdays with Morrie is a magical chronicle of their time together, through which Mitch shares Morrie's lasting gift with the world.

No one but Mitch Albom could have read Tuesdays with Morrie so effectively. As the author of this inspirational true story, Albom uses verbal inflection in exactly the right places to evoke humor, empathy, and emotion. It's an honest reading, and the underlying timbre of private memory pushes it past mere recitation to pure storytelling.

The titular Morrie was Morrie Schwartz, Albom's university professor 20 years before the events being narrated. An accidental viewing of an interview with Morrie on Nightline led Albom to become reunited with his old teacher, friend, and "coach" at a time when Albom, a successful sportswriter, was struggling to define dissatisfactions with his own life and career. Morrie, on the other hand, after a rich life filled with friends, family, teaching, and music, was dying from Lou Gehrig's disease, a crippling illness that diminished his activities daily. Albom was one of hundreds of former students and acquaintances who traveled great distances to visit Morrie in the final months of his life.

The 14 Tuesday visits that followed their reunion took Albom--and will take listeners with him--on a journey of reawakening to life's best rewards. The story is told in a journalistic style that never crosses into pathos. That a professional writer can write well is not surprising, but Albom also reads well, with clear enunciation and a talent for mimicry. Another reader might have interpreted the professor's aphorisms as droll humor or wrung a wrong note at an inappropriate moment, making the story a maudlin tearjerker; instead it is read for what it is, a tribute to a remarkable teacher. (Running time: four hours, three cassettes) --Brenda Pittsley

"This is a sweet book of a man's love for his mentor. It has a stubborn honesty that nourishes the living."
--Robert Bly, author of Iron John

"A deeply moving account of courage and wisdom, shared by an inveterate mentor looking into the multitextured face of his own death. There is much to be learned by sitting in on this final class."
--Jon Kabat-Zinn, coauthor of Everyday Blessings and Wherever You Go, There You Are

"All of the saints and Buddhas have taught us that wisdom and compassion are one. Now along comes Morrie, who makes it perfectly plain. His living and dying show us the way."
--Joanna Bull, Founder and Executive Director of Gilda's Club

Book Description Wheeler Pub Inc, 1999. PAPERBACK. Condition: New. New Book. Purchased from Sale Table at local book retailer(all new books). I have examined all aspects of this volume and find no flaws whatsoever. (Note:Your Satisfaction is Guaranteed. If you are not completely happy, we will refund your money immediately.no questions asked. Books purchased before 11am EST normally shipped same day.). Seller Inventory # SEPx06xx0021