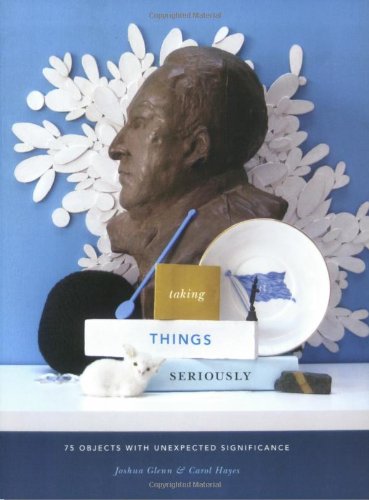 We all have something in our lives that while not obviously valuable, is displayed as though it were a precious and irreplaceable artifact. Inquire about the object's provenance and you'll likely be treated to a lively anecdote about how it came into your host's possession. Keep digging, and you might even crack the code of what the thing really means.

Taking Things Seriously is a wonder cabinet of seventy-five unlikely thingamajigs that have been invested with significance and transformed into totems, talismans, charms, relics, and fetishes: scraps of movie posters scavenged from the streets of New York by Low Life author Luc Sante; the World War I helmet that inoculated social critic Thomas Frank against jingoism; the trash-picked, robot-shaped hairdo machine described by its owner as a chick magnet; the bagel burned by actor Christopher Walken, moonlighting as a short-order cook. The owners of these objects convey their excitement in short, often poignant essays that invite readers to participate in the enjoyable act of interpreting things. You'll never look at the bric-a-brac on your shelves the same way again.

Joshua Glenn is a Boston-based writer and editor at the Boston Globe.

In an age when we're obsessed with the design, provenance, and value of every objects around us, these 75 short essays and photographs honor those magical, mysterious items that wiggle their way into our lives, and somehow into our hearts....eclectic group of creatives who eloquently describe their little pieces of Nothing Special--and why they mean everything to them. -- StepInside Design, December 2007

Short essays about treasured possessions, by artists, designers, writers and performers. The cartoonist and musician recalls playing with an assortment of rubber animals as a boy, 'acting out battles, domestic scenes, everything.' But the star was always Sunshine, above: 'one special little yellow pig.' -- New York Times Book Review, August 2007

Taking Things Seriously is a process, an experience in looking and interpreting, reminding us to take a good look at all the ordinary things around and to realize that they are each far more just that. -- FiveandaHalf.net, September 17, 2007

The Must List #9. Proving one man's trash is another's treasure, this collection of photos and essays shows how the unlikliest of things can provide inspiration. -- Entertainment Weekly, October 26, 2007