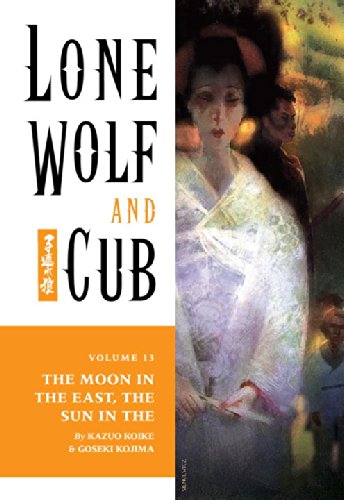 Yagyu Retsudo is a man on fire. For years he's been planning the destruction of Ogami Itto, the Lone Wolf. Ogami is a one-man army, having cut down all of Yagyu's sons — except one, who's been sent to avenge his brothers or die trying! Meanwhile, the toughest cop in Edo, now retired, has the chance to take in the killer of a lifetime, Ogami himself. But is he up to the task? And Daigoro, the Wolf's cub, finds himself in adventures of his own, befriending a rich family and their spoiled son, and mysterious female falconers! It's all in a day's work for Lone Wolf and Cub... Don't miss out on the best-selling graphic novels of the year and a series that belongs on every bookshelf!

This volume contains the following stories:
The Moon in the East, the Sun in the West
"Marohoshi" Mamesho
Spoiling Daigoro
The Hojiro Yagyu
The Bird Catchers

Thought widely respected as a powerful writer of graphic fiction, Kazuo Koike has spent a lifetime reaching beyond the bounds of the comics medium. Aside from co-creating and writing the incredibly successful Lone Wolf and Cub and Crying Freeman manga, Koike has hosted television programs; founded a golf magazine; produced movies; written popular fiction, poetry, and screenplays; and mentored some of Japan's best manga talent. Koike and artist Goseki Kojima's Lone Wolf and Cub was first serialized in Japan in 1970 and continued its hugely popular run for many years, being collected as the stories were published, and reprinted worldwide. Koike collected numerous awards for his work on the series throughout the next decade. Starting in 1972, Koike adapted the popular manga into a series of six films, The Baby Cart Assassin saga, garnering widespread critical acclaim for his screenwriting abilities, and presenting the epic manga basis of the hit films to a world of fans who were hungry for more stories from the Lone Wolf and Cub saga. In 2000, Dark Horse Comics embarked on a landmark publishing program to bring all 8000-plus pages of Lone Wolf and Cub to American audiences for the first time. Over the next two years, Dark Horse will release 28 volumes of this revered material, with each volume containing approximately 300 pages of masterful samurai storytelling.