Items related to Bamn (By Any Means Necessary): Outlaw Manifestos &... 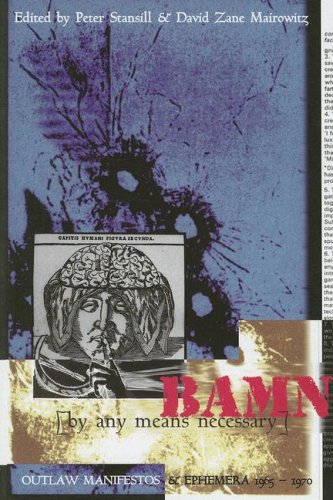 Cultural Writing. This historic anthology--first published in 1971--presents many of the radical and visionary movements, groups, and cells of protest and propaganda of the late 1960's. It includes such now-well-known groups as the Dutch 'Provos,' the Black Panthers, the Yippies and the Situationists, among others. It also documents the early years of the women's liberation movement, the birth of the drug culture and the free religions movement, the world-wide communal movement, and the global protest against ecological destruction. Here are many of the essential documents of the underground, as well as samples of its ephemera, including flyers, posters and leaflets. This book is essential for understanding the depth and range of the Sixties protests: calls to action "By Any Means Necessary." Edited by Peter Stansill and David Zane Mairowitz.