Items related to The Washington Story 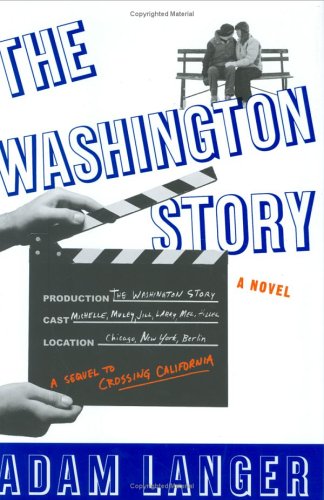 Chicago high-school sweethearts Jill and Muley, their families, and their friends share triumphs and despair over the course of five years that are marked by such events as the rise of Mikhail Gorbachev, the explosion of the space shuttle Challenger, and the return of Halley's comet. By the author of Crossing California. 50,000 first printing.

For those of us who woefully turned the last page of Crossing California, Adam Langer's masterful debut, The Washington Story offers a gratifying, if not lengthy, reunion with the people and places whose stories so engaged readers the first time around. In this tightly packed sequel, Langer revisits the same West Rogers Park neighborhood in Chicago where we first met a fascinating cast of characters, from high schoolers Muley Scott Wills, Jill and Michelle Wasserstrom, and Hillel Levy to movie producers Mel Coleman and Carl "Slappit" Silverman, whose lives continue to intertwine in ways that make this expansive novel both a delight and a challenge to fully absorb.

Like in Crossing California, time and place are as central to the story as the characters themselves. The Washington Story takes place between 1982 and 1987, and follows the political career of Chicago mayor Harold Washington, the Challenger space shuttle disaster, and the changing landscape of both an Orthodox Jewish neighborhood in Chicago and the world beyond its borders. From a dorm room at Vassar to a hostel in West Berlin, Langer follows his characters across the street and around the globe, observing their behavior with a sharp eye for detail and an understated yet inspired sense of humor that can be unbelievably rewarding at times. ("He would sit alone at Ponderosa, where he would eat chili and pretend to read Jack Kerouac ... though when he would return alone to his hotel room, he would put down The Dharma Bums and pick up the GMAT study guide.") At one point in Jill's college career, she wonders if she could ever be considered prettier than her starlet sister Michelle. Yet according to Langer, it's "Not that she really cared about being pretty; she mostly cared about not being ugly."

Observations like these are what make The Washington Story so much more than a simple coming-of-age tale. Rather, Langer's unpretentious style, coupled with his immense talent for storytelling, rewards readers with a sequel worthy of its predecessor. --Gisele Toueg

Adam Langer, the author of the acclaimed debut novel Crossing California, writes a regular column on publishing for The Book Standard. He has worked extensively as a print journalist, film producer, and playwright, and was a recipient of a National Arts Journalism Fellowship at Columbia University. Langer was born and grew up in Chicago but now divides his time between New York City and Bloomington, Indiana.

Book Description Riverhead Hardcover. Hardcover. Condition: New. 1573223247 Book is in perfect condition and will be SHIPPED WITHIN 24 hours of receiving the order! *** IF I have multiple copies, COVERS COULD BE DIFFERENT; IF important please ask. ***. Seller Inventory # BX16-1238