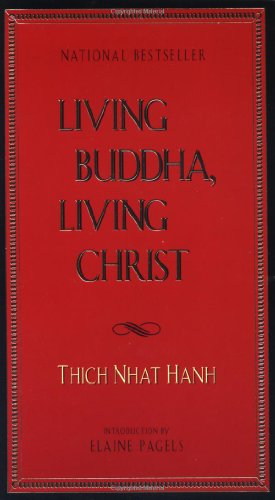 Exploring the spiritual connection between Christianity and Buddhism, Thich Nhat Hanh reawakens an understanding of both religions and offers simple yet meaningful ways to enhance our daily lives. Reprint.

If you have always assumed that Christianity and Buddhism are as far apart philosophically as their respective founders were geographically, you may be in for a bit of a surprise. In this national bestseller, Zen monk and social activist Thich Nhat Hanh draws parallels between these two traditions that have them walking, hand in hand, down the same path to salvation. In Christianity, he finds mindfulness in the Holy Spirit as an agent of healing. In Buddhism, he finds unqualified love in the form of compassion for all living things. And in both he finds an emphasis on living practice and community spirit.

The thread that binds the book is the same theme that draws many Christians toward Buddhism: mindfulness. Through anecdotes, scripture references, and teachings from both traditions, Nhat Hanh points out that mindfulness is an integral part of all religious practice and teaches us how to cultivate it in our own lives. Nhat Hanh has no desire to downplay the venerable theological and ritual teachings that distinguish Buddhism and Christianity, but he does cause one to consider that beyond the letter of doctrine lies a unity of truth.

Thich Nhat Hanh (pronounced tik-not-hawn) is a world-renowned writer, scholar, spiritual leader, and Zen Buddhist monk. Since age sixteen, he has been a Buddhist monk, a peace activist, and a seeker of the way. He has survived three wars, persecution, and more than thirty years of exile from his native Vietnam, when he was banned by both the non-Communist and Communist governments for his role in undermining the violence he saw affecting his people. He is still the master of one of the most prominent temples in Vietnam, and his lineage is traceable directly to the Buddha himself. A prolific author, Nhat Hanh has written more than one hundred books of philosophy, poetry, and fiction. Currently, Nhat Hanh lives in a monastic community in southwestern France that he founded, called Plum Village, where he teaches, writes, gardens, and works to help refugees worldwide. More information can be found at PlumVillage.org.