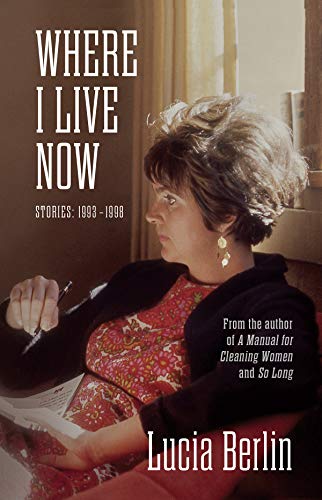 Set mainly in Los Angeles, Lucia Berlin's gritty working-class stories bridge the gap between the Americas - rich and poor, North and South, Anglo and Hispanic. While her style has been compared to Raymond Carver's, and her dream- and drink-addicted characters to Richard Yates', her fictional territory and fatalistic humor are hers alone.

The 18 affecting stories in this compelling collection, Berlin's third in a decade (after Homesick and So Long), are set predominantly in the Southwest, and often feature hapless women addicted to alcohol or married to drug addicts. In "Mijito," 17-year-old pregnant Amelia Romero, homesick for Mexico and speaking no English, sees her no-good husband, Manolo, disappear behind prison bars moments after their marriage. In "Carmen," pregnant Mona is sent on an ill-fated drug run by her addicted husband. Carlotta Moran, the incorrigible heroine of "Let Me See You Smile," can't stay sober long enough to get her life in gear. Other stories feature children as victims: Lu, the older, less-loved sister of the linked stories "Mama," "Silence" and "Sometimes in Summer," dodges the lurid advances of a drunken grandfather and tries to protect her young sister, Sally, from his grasp. The theme of devoted siblings resurfaces as Do a Claudia cares tenderly for her dying sister in "Del Gozo Al Pozo." Happily, Berlin exhibits a flair for comedy, which surfaces in a few tales, lightening the mood. "Evening in Paradise" pits a harried hotel-keeper against hopped-up Hollywood celebrities and small-town hustlers as the imagined cast and crew of The Night of the Iguana shake up Puerto Vallarta, while in the caustically witty "The Wives," Laura and Decca hilariously dissect their mutual ex-husband. There are minor flaws--Berlin's occasional use of two narrators tends to confuse, and some readers may be put off by her reluctance to translate Spanish--but for the most part, she is marvelously successful, placing her memorable characters in gripping situations, plumbing their messed-up lives for pathos and allowing us to see deeply into their souls. (Aug.)

"Berlin's literary model is Chekhov, but there are extra-literary models too, including the extended jazz solo, with its surges, convolutions, and asides. This is writing of a very high order." --August Kleinzahler, London Review of Books

"This remarkable collection occasionally put me in mind of Annie Proulx's Accordion Crimes, with its sweep of American origins and places. Berlin is our Scheherazade, continually surprising her readers with a startling variety of voices, vividly drawn characters, and settings alive with sight and sound." --Barbara Barnard, American Book Review