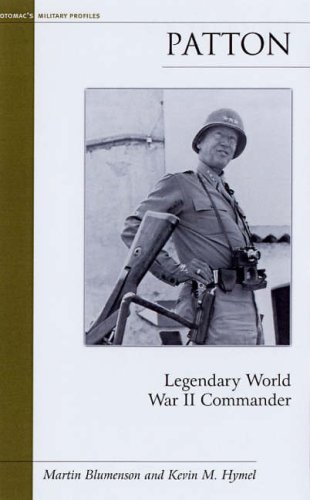 Shortly after World War II, when the Allies interrogated Field Marshal Gerd von Rundstedt, the senior commander who opposed the Allied invasion of France, they asked him to rate the skills of his opponents. He is reputed to have said, “Patton, he was your best.”

Praise for his performance was precisely what George Smith Patton, Jr., had sought all his life. As a cadet at the Virginia Military Institute and West Point, he was already searching for what he called “the undefinable difference” that distinguished a great general from the good ones. He led a mechanized attack in Mexico and a tank battalion during World War I. In World War II he turned American fortunes around in North Africa, chased the Germans out of Sicily, and sparked the breakout and liberation of France. When the Germans attacked the American First Army in the Battle of the Bulge, Patton turned his army north and smashed the German salient. He then drove into the heart of Germany and reached Czechoslovakia by war’s end.

Brilliant yet flawed, Patton’s leadership style drove himself and his men to acts of bravery and victory. Half uncouth, provincial cowboy and half cultured sophisticate, the man behind the warrior mask was a complex and paradoxical person. He became an icon of the American military leader and the uncompromising individual.

Kevin M. Hymel is the research director for WWII History and Military Heritage magazines and is the author of Patton’s Photographs: War as He Saw It (Potomac Books, Inc., 2006). He is a battlefield tour guide for Stephen Ambrose Historical Tours and leads an annual tour of General Patton’s European battlefields. He lives in Arlington, Virginia.