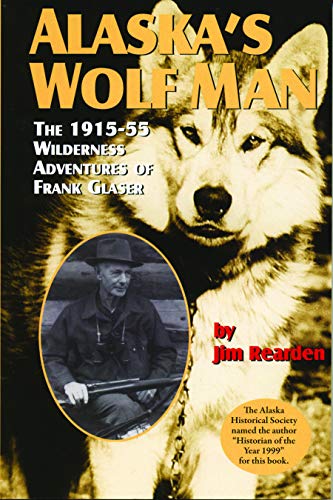 For forty years Frank Glaser trekked across wilderness Alaska on Foot, by wolf-dog team, and eventually by airplane. In his career he was a market hunter, trapper, roadhouse owner, professional dog team musher, and a federal predator agent. He was a legend in his own time, respected and admired for his sill as a woodsman and hunter by fellow sourdoughs and by his many Eskimo friends.

Jim Rearden is a World War II veteran who served aboard a U.S. Navy destroyer escort in the Pacific theater of war. He holds wildlife degrees from Oregon State University and the University of Maine; both have honored him as a distinguished alumnus. In 2005 he received an honorary Doctor of Science degree from the University of Alaska Fairbanks for his teaching, conservation work, and writings on Alaskan subjects. He has been a resident of Alaska since 1950 when he organized the department of wildlife management at the University of Alaska Fairbanks, and taught as head of that department for four years. He ha worked as a construction laborer, a registered hunting guide, a clerk in a trading post, a state fishery biologist, and a commercial fisherman. He is a licensed private pilot.

He served on the Alaska Board of Fish and Game, and the Board of Game, for twelve years, and was Outdoors Editor for Alaska Magazine for twenty years, serving at the same time as a Field Editor for Outdoor Life. President Gerald Ford appointed him to the National Advisory Committee on Oceans and Atmosphere where he served for eighteen months. He has written twenty-four books, ad more than 500 magazine features, on Alaskan subjects. He lives on the Kenai Peninsula with his wife, Audrey, in a log home he built himself.

"Nothing that has been written about Alaska captures so intensely the vastness, the loneliness, the natural savagery of this land as Alaska's Wolf Man. It surpasses anything that Ernest Thompson Seton or Jack London ever did and is far more real because it is actual distilled experience that cannot be contrived. This is a classic that will stand tall in the literature of Alaska." --Cliff Cernick, former editor of the Anchorage Daily News and The Fairbanks Daily News-Miner, and currently Alaska Editor of the Wester Flyer