Items related to Scary Godmother: Ghoul's Out For Summer

Scary Godmother: Ghoul's Out For Summer 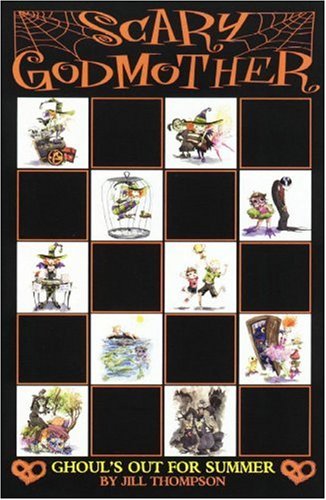 It's summer break - Scary Godmother style! Hannah suffers through summer camp with her mean cousin Jimmy, Bug-A-Boo spends a frightening vacation with his nagging parents, Orson attends Summer Ghoul with the ancient and demented Dark Master and Scary Godmother runs into her old schoolmate Tinkaree only to wind up kidnapped and brainwashed! Will our favorite monsters save themselves in time to enjoy fun in the sun?

Jill Thompson, a graduate of The American Academy of Art in downtown Chicago, has spent most of her life drawing comics, having worked as a professional since the age of fifteen. Over the years, Thompson has garnered critical acclaim on titles including WONDER WOMAN, THE SANDMAN, SWAMP THING, THE INVISIBLES and THE DREAMING.

Since the first SCARY GODMOTHER storybook was published, Thompson has continued the adventures of her spooky characters in three more storybooks and over a dozen comic books. In addition to her many publications for Sirius, Thompson has been working with Mainframe Entertainment to produce a computer-animated version of SCARY GODMOTHER. The whimsical series has already received rave reviews as a stage production, presented by Chicago’s Runamuck Productions last fall. Jill Thompson also has acquired much mainstream success as the illustrator of the best-selling storybook, MICK FOLEY'S HALLOWEEN HIJINX.

1. Scary Godmother: Ghoul's Out for Summer

2. SCARY GODMOTHER: GHOUL'S OUT FOR

3. Scary Godmother: Ghoul's Out For Summer