Items related to This Crazy World of Chess

This Crazy World of Chess 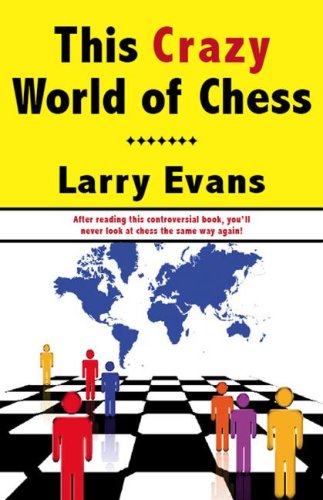 Fascinating, intriguing, and controversial, the dean of American chess tells the never-before-told machinations and stories of world championship chess and what really goes on behind the scenes of the game at its highest level. If you think that chess and marbles are the only games free from politics, you can scratch that idea. These 101 entertaining dispatches from the front deal with the crazy world of chess ranging from politics, Fischermania (and Fischer's paranoid antics), the real deal behind the deep blue supercomputer that beat Kasparov, to just plain gossip and fun.

Grandmaster Larry Evans is a 5-time USA champion, author of 25 books, and the "dean" of American chess.  His national syndicated column, Evans on Chess, has appeared continuously since 1971.  He coached Bobby Fischer during his world championship run and is generally considered to be the most authoritative, astute and witty observer of the international chess scene.

1. This Crazy World of Chess