Items related to Bacon 24/7: Recipes for Curing, Smoking, and Eating 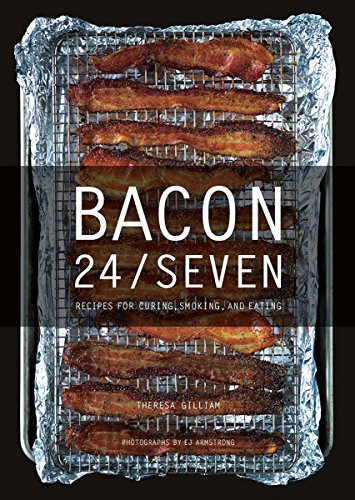 There's never a wrong time to eat bacon, and this new cookbook proves it, offering mouth-watering recipes for any hour of the day, from Pork Belly Hash with Kale and Sweet Potatoes to Apple Pie with Bacon Strudel. Bacon isn't just an infatuation―it's a way of life.

Even as pork prices rise and the economy fluctuates, consumption of bacon remains steady. The American Meat Institute reports that bacon has an almost cultlike following; the Facebook page About Bacon has more than 10 million Likes. Its sublime savory taste has been endorsed by scientists as well: Bacon boasts umami, the seductive “fifth taste” that heightens and rises beyond sweet, sour, bitter, and salty. Bacon isn’t just an infatuation―it’s a way of life. In Bacon 24/7, author Theresa Gilliam and photographer E Jane Armstrong have teamed up to create a fun and current cookbook to feed the need for bacon. They include recipes for every hour, from dawn through dark, as well as info on topics such as how to cure and smoke your own bacon. Drool-worthy photographs highlight dishes such as Pasta Carbonara, Pork Belly Hash with Kale and Sweet Potatoes, and Apple Pie with Bacon Strudel. Any evening that begins with a Bacon-Infused Manhattan holds the promise of being an unforgettable night. 100

Theresa Gilliam was a chef before entering the film industry, where she worked on major television and motion picture sets as a lighting technician. Her love of food would not be denied, however, so she found a career as a recipe-developer and commercial food stylist.

E Jane Armstrong is the founding director of Armstrong Pitts Studios and Black Building Productions. Her award-winning photography has appeared in cookbooks and food publications nationwide. She has built an international roster of well-known clients, including Starbucks, Tyson, Continental Mills, and Whole Foods.

The celebrity meat of contemporary carnivorism, bacon figures prominently in recipes and on restaurant menus. It’s not just with eggs at breakfast or with slices of tomato and lettuce leaves at lunch, but it shows up ubiquitously at meals from morn to midnight and beyond, as Gilliam documents. Truly dedicated bacon fanatics can follow Gilliam’s instructions for turning a slab of pork belly into smoky rashers over the course of a week. Those less motivated have dozens of recipes for waffles, salads, soups, sandwiches, appetizers, entrées, and desserts. Some dishes, such as Alsatian onion tart and spaghetti carbonara, faithfully reproduce classics. Crab and corn chowder would not be out of place on any New England table. On the other hand, Gilliam’s transformation of the classic BLT into a cold soup befits a modernist kitchen, and bacon baklava pushes the boundaries of fusion cooking. Anyone ready to belly up to the bar for a bacon Manhattan? --Mark Knoblauch