Items related to All Families Are Psychotic: A Novel

Coupland, Douglas All Families Are Psychotic: A Novel

All Families Are Psychotic: A Novel 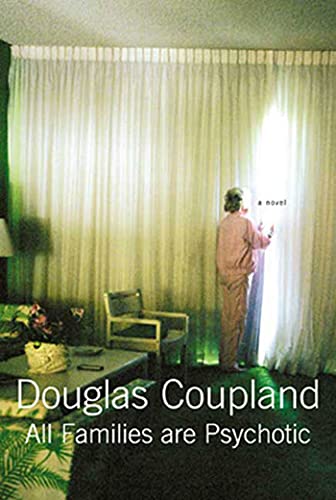 The most disastrous family reunion in the history of fiction.

The Drummond family descends upon the state of Florida, cutting a swath through Disney World, Cape Canaveral, the swamps and the highways, gathering to watch the launch into space of their beloved daughter and sister, Sarah. What should be a cause for celebration becomes instead the impetus for a series of mishaps and coincidences that place them in constant peril. In a family where gunplay, black market negotiations and kidnapping are all part of an afternoon in the sun, you can only imagine what happens when things take a turn for the worse.

As the family spins dangerously out of control, the story unfolds at a lightning-fast pace. With one plot twist after the other, the Drummonds fall apart and come together in the most unexpected ways.

Heartwarming and maddeningly human, the family Coupland creates is like one you've never seen before-with the possible exception of your own.

Canadian author Douglas Coupland's seventh novel could be subtitled When Bad Things Happen to Bad People. As the estranged members of the Drummond family straggle into Florida for youngest sister Sarah's impending space shuttle launch, we only begin to glimpse the true meaning of the word dysfunctional. The family, plagued by terminal disease, financial disaster, felonious activity, infidelity, and violence, is forced--by a series of ever more fantastic occurrences--to attempt to deal with each other. That would be an easier task if they didn't loathe one another with a ferocity usually reserved for war criminals. It's not quite Jerry Springer-style tabloid TV set in Disney's Haunted Mansion, but the family members do muster the strength to insult, assault, and infect one another with abandon. With the exception of the family matriarch, Janet, they are unappealing and selfish, but without Machiavellian brilliance. Instead, they're inclined toward out-and-out stupidity, blinded by self-interest rather than enlightened by it. As they bumble through misadventure after misadventure, there seems to be no reason to cheer for them. Even Sarah, the family's shining star, has her dark side.

True to Coupland's style, the book reads lightning fast. The author punctuates his narrative with clipped dialogue and punchy exchanges that advance the palpable sense of unease and tension running throughout. And amidst the acrimony, Coupland throws a genuine caper into the plot, involving Prince William's farewell letter to his mother, Princess Diana. Add to that the oppressive heat and the postmodern, pop culture junkyard of Coupland's Florida setting, and the entire book brews and builds like a roiling tropical storm. --S. Duda

Praise for All Families Are Psychotic

"[ All Families Are Psychotic] works because Coupland writes as sweetly and cleanly as a vapour trail." — Elle Canada

"[Douglas Coupland’s] focus is always on the moral implications, on human relationships and feelings. There is an almost spiritual aspect to his work that makes it emotionally compelling, and redemption is always at hand to pull his vision back from the brink of apocalypse. But more important perhaps, Coupland can write beautifully. . . . we shouldn’t ignore writers like Coupland who have vision and a thing or two to say. . . . Coincidence features heavily, there is the usual cast of zany characters, an outlandish series of events, the signature cynicism and wry humour - and transcendent moments of epiphany. . . . Coupland Country is ultimately a funny, quirky, compassionate and forgiving place to inhabit.” — Toronto Star

"With All Families Are Psychotic author Douglas Coupland has completed a seven-novel mission: he’s finally moved his characters out of the rumpus room. . . . offers a better view of our glittering, behemoth spaceship Earth than most offerings by the usual literary crowd. . . . Coupland ought to be our guide to today’s chilled, illed psychonauts of inner and outer space." — Quill & Quire

"There is wit à la early Pynchon or McGuane or Elmore Leonard, and the story does hum along - amazing twists and turns, snappy dialogue, meditations on the future, on postwar concerns: technology, feminism, consumerism, crime, junk culture, genetics." — The Globe and Mail

"As rich as an ovenful of fresh-baked brownies and twice as nutty. . . . Everyone with a strange family — that is, everyone with a family - will laugh knowingly at the feuding, conducted with a maestro’s ear for dialogue and a deep understanding of humanity. Coupland, once the wise guy of Generation X, has become a wise man." — People Magazine

"[Douglas Coupland] has ventured past his trademark satirical style to write an outright farce. . . . [He] has written what is probably his best novel to date. . . . The intricate pacing [is] more like 17th-century drama — John Webster, Ben Jonson or Molière — than slacker sitcom, which is truly a revelation. . . ." — L.A. Weekly

"Although the Drummonds appear to be self-destructing, author Coupland reveals himself to be, somewhat surprisingly, an optimist. For him, the new millennium is an era full of promise and potential miracles, despite the seemingly terminal state of the world." — Booklist

"Taking whacks at Florida is a bit like shooting a whale in a barrel, but Coupland does it with precision and originality. . . . vivid and true." — Washington Post

"True to Coupland's style, the book reads lightning fast. The author punctuates his narrative with clipped dialogue and punchy exchanges that advance the palpable sense of unease and tension running throughout. . . . The entire book brews and builds like a roiling tropical storm." —Amazon.com

"Coupland mines tabloid territory for sensationalism, which he then undermines with ironic self-awareness. The can-you-top-this atmosphere will keep Coupland's Gen-X readers (the ones who religiously watch Cops for the laughs) totally amused.” — Publishers Weekly

“It seemed paradoxical that a writer so revered for his hipness resembled, in practice, nobody so much as Jane Austen.... In the resultant unravelling there isn’t a boring page.” — The Literary Review

“He gets beneath their skin, convincing us that their lives of Gothic chaos contain their own perverse logic – a postmodern take on Tolstoy’s maxim that ‘all unhappy families are alike in their unhappiness.’ For a writer so immersed in the slippery textures of our time, Coupland reveals old-fashioned concern for the nature of our social interaction. He questions why we value what we do, and the price we pay to get it. He confronts our imprisoning luxury, with its Faustian freedoms. His hi-tech flights of fancy conceal a baffled humanist; one who echoes G. K. Chesterton’s remark that ‘people are much more eccentric than they are meant to be.’” — Sunday Express

“Coupland manages to balance the more weighty strands of the story with an absurdly satirical vision, without compromising either. At the same time, he mines the present with such intensity that it seems like science fiction. This strange, often miraculous fusion has you laughing, thinking and crying all at once, and suggests that Coupland’s writing is becoming more mature than ever.” — Evening Standard

“The most frightening element of the novel gives the lie to the truth of its title. Fantastic characters and a beyond-belief plot are insurance policies for white knuckles all the way, punctuated with belly laughs.” — i-D Magazine

"…being broken is a way of being together. Despite the meltdown of the family, this book lets us know that we don’t need to worry. . . . Coupland’s novel is ultimately optimistic. Like Anne Tyler, he intertwines the garish and unmeaning events he describes with a thread of hope, sometimes contained in a reminiscence of childhood, sometimes projected into a possible future. . . . Coupland presents us with a heroine rising above the mess of modern America, an honestly trusting person moving through the downbeat style and the defeated, disconnected world of modern America." — Times Literary Supplement

“[Douglas Coupland] is on an incredible creative roll. His last four novels . . . are so good and so distinctive that they seem to me to mark a genuine seismic shift in the literary landscape. Could it be that not everyone is as convinced of Coupland’s brilliance as I am? . . . . This is high melodrama: divorce, dysfunction, inter-generational sex, marital infidelity, life-threatening illnesses (everyone has at least one) and spacemen. But Coupland does not tell it in the florid, intense style of the melodrama queen. The tone is rather cool and slow, almost like a song played a beat behind the bar. . . . sophisticated . . . dreamlike.” [full review also compares Doug to Martin Amis and Haruki Murakami] — The New Statesman

“Reading his increasingly assured prose is like watching a teen idol take on Hamlet and pull it off.” — Toronto Life

“The self-wrought oracle of our age.” — Saturday Night

“Douglas Coupland continues to register the buzz of his generation with a fidelity that should shame most professional Zeitgeist chasers." —Jay McInerney, The New York Times Book Review

Miss Wyoming
“Equal parts love story and absurdist parable, it seamlessly meshes Coupland’s trademark ironic detachment with an unapologetic romanticism that has been absent from his previous work. The intelligence and humour of Coupland’s prose engages the mind while the unabashed yearning of his characters hooks the heart.” — Maclean’s

Girlfriend in a Coma
“To call Coupland the John Bunyan of his set would not be hyperbole…. Girlfriend approaches an eccentric jeremiad worthy of Kurt Vonnegut.” — The Washington Post

Polaroids from the Dead
“He bravely commits himself to material that is rich and deeply felt.” — The New York Times

Microserfs
"The novel’s real fun is in the frequent and rapidly fired pop-culture references that spin the ’70s, ’80s, and ‘90s … and Coupland uses them with relish.” — Entertainment Weekly

Life After God
“Coupland has at his disposal a dazzling array of tools with which to shape the emotions of his readers: the whimsy of a latter-day Jack Kerouac, the irony of a young Kurt Vonnegut, the poignancy of early John Irving.” — Bookpage

Shampoo Planet
“Having called Coupland's first book a Catcher in the Rye for our time, I repeat myself. Nobody has a better finger on the pulse of the twenty-something generation.” — Cosmopolitan

1. All Families Are Psychotic: A Novel

2. All Families Are Psychotic: A Novel

Book Description Hardcover. Condition: New. Dust Jacket Condition: New. 1st Edition. FIRST EDITION/FIRST PRINTING with a complete number line beginning in 1. NEW & UNREAD - SPINE HAS NOT BEEN CRACKED - no flaws or defects - Hardcover in Dust Jacket as issued. DUST JACKET IN PROTECTIVE BRODART COVER - A VERY COLLECTIBLE COPY OF THIS BOOK - PHOTOS OF THE ACTUAL BOOK SENT UPON REQUEST. THIS IS AN INTRODUCTORY PRICE FOR OUR GRAND RE-OPENING. ALL PRICES WILL BE ADJUSTED LATER TO REFLECT MARKET PRICES. The boards Are Clean, Not Bumped. Fore Edges Are Clean. Dust Jacket Is In Fine Condition. No Chipping, Crinkles, or tears. Not Price Clipped. All books are boxed and shipped with bubble wrap - ALL BOOKS HAVE BEEN BOXED IN CLIMATE CONTROLLED STORAGE AND HAVE NOT BEEN TOUCHED BY ANY OTHER HUMAN THAN ME FOR AT LEAST THE LAST 10 YEARS - ALL BOOKS ARE SEALED AND BUBBLE WRAPPED AND SHIPPED IN BOXES - YOU CAN BUY HERE WITH CONFIDENCE KNOWING THAT A BUNCH OF STRANGERS HAVE NOT HANDLED YOUR BOOK -. Seller Inventory # 004662

3. All Families Are Psychotic: A Novel

4. All Families Are Psychotic: A Novel