Items related to The Book of Prefaces

The Book of Prefaces

The Book of Prefaces 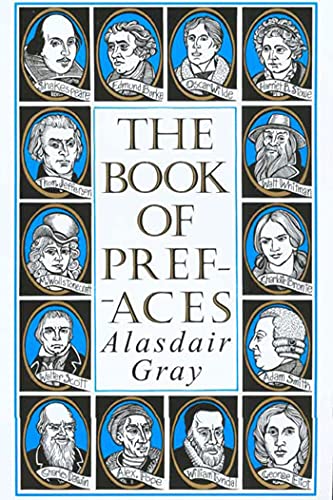 This book is a unique history of how literature spread and developed through three British nations and most North American states. This anthology gathers the work of great writers such as Geoffrey Chaucer, Lewis Carroll, John Milton, Edgar Allan Poe, and many more. The Book of Prefaces offers an unusual and unprecedented look at literature, a treat for any reader.

The preface usually contains one of four pleasures, says anthologist Alasdair Gray. There is the biographical snippet, full of gossipy details that "make us feel at home in earlier times." There is the author's attempt to forestall criticism (in first editions) or to answer it (in later ones). There is the report on the state of civilization, both favorable (see Walt Whitman) and unfavorable (see Karl Marx). And there is the attack on other writers or translators, sometimes bridging centuries and containing spears thrown at the long dead. All four pleasures are well represented in this 640-page treasury of English and American intros, which runs from an A.D. 675 translation of Genesis to the 1920 poems of Wilfred Owen. Why stop there? "The flow is stopped at 1920," admits Gray in his own disarmingly self-effacing preface, "by costs of using work still in copyright."

This is anything but anthology-on-the-cheap, however. Gray (Lanark and A History Maker) poured 16 years of research into The Book of Prefaces, and adds considerable value with his own running commentary, which straggles down the margins in brash red ink. Gray on the God of Genesis: "This God, with revenge in mind, first makes earth ugly as hell." Among God's anthologized fellows are Mark Twain, who defends his use of Southern dialect in The Adventures of Huckleberry Finn; Lewis Carroll, who anticipates his critics' charges of writing nonsense in The Hunting of the Snark and proceeds to prove their case; and Charles Darwin, who recalls how the seeds of The Origin of Species were sown aboard the HMS Beagle. Gray mixes scholarly research with playful eccentricities: When was the last time you saw a book's typesetter, typist, and publisher memorialized in pen-and-ink drawings? And "with this in their lavatory," writes the cheeky author, "everyone else can read nothing but newspaper supplements and still seem educated." He may be right. --Claire Dederer

Alasdair Gray has spent over thirteen years on this project although he has written a number of books in the meantime, among them the Whitbread and Guardian prize-winning novel Poor Things and the story collection, Ten Tales Tall and True.

1. The Book of Prefaces

2. The Book of Prefaces

3. The Book of Prefaces

4. The Book of Prefaces

5. The Book of Prefaces Gray, Alasdair