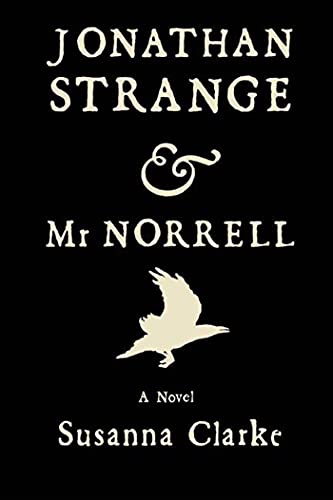 English magicians were once the wonder of the known world, with fairy servants at their beck and call; they could command winds, mountains, and woods. But by the early 1800s they have long since lost the ability to perform magic. They can only write long, dull papers about it, while fairy servants are nothing but a fading memory.

But at Hurtfew Abbey in Yorkshire, the rich, reclusive Mr Norrell has assembled a wonderful library of lost and forgotten books from England's magical past and regained some of the powers of England's magicians. He goes to London and raises a beautiful young woman from the dead. Soon he is lending his help to the government in the war against Napoleon Bonaparte, creating ghostly fleets of rain-ships to confuse and alarm the French.

All goes well until a rival magician appears. Jonathan Strange is handsome, charming, and talkative-the very opposite of Mr Norrell. Strange thinks nothing of enduring the rigors of campaigning with Wellington's army and doing magic on battlefields. Astonished to find another practicing magician, Mr Norrell accepts Strange as a pupil. But it soon becomes clear that their ideas of what English magic ought to be are very different. For Mr Norrell, their power is something to be cautiously controlled, while Jonathan Strange will always be attracted to the wildest, most perilous forms of magic. He becomes fascinated by the ancient, shadowy figure of the Raven King, a child taken by fairies who became king of both England and Faerie, and the most legendary magician of all. Eventually Strange's heedless pursuit of long-forgotten magic threatens to destroy not only his partnership with Norrell, but everything that he holds dear.

It's 1808 and that Corsican upstart Napoleon is battering the English army and navy. Enter Mr. Norrell, a fusty but ambitious scholar from the Yorkshire countryside and the first practical magician in hundreds of years. What better way to demonstrate his revival of British magic than to change the course of the Napoleonic wars? Susanna Clarke's ingenious first novel, Jonathan Strange & Mr. Norrell, has the cleverness and lightness of touch of the Harry Potter series, but is less a fairy tale of good versus evil than a fantastic comedy of manners, complete with elaborate false footnotes, occasional period spellings, and a dense, lively mythology teeming beneath the narrative. Mr. Norrell moves to London to establish his influence in government circles, devising such powerful illusions as an 11-day blockade of French ports by English ships fabricated from rainwater. But however skillful his magic, his vanity provides an Achilles heel, and the differing ambitions of his more glamorous apprentice, Jonathan Strange, threaten to topple all that Mr. Norrell has achieved. A sparkling debut from Susanna Clarke--and it's not all fairy dust. --Regina Marler

"Ravishing...Combines the dark mythology of fantasy with the delicious social comedy of Jane Austen into a masterpiece of the genre that rivals Tolkien."―Time

At the dawn of the nineteenth century, two very different magicians emerge to change England's history. In the year 1806, with the Napoleonic Wars raging on land and sea, most people believe magic to be long dead in England―until the reclusive Mr Norrell reveals his powers, and becomes a celebrity overnight.

Soon, another practicing magician comes forth: the young, handsome, and daring Jonathan Strange. He becomes Norrell's student, and they join forces in the war against France. But Strange is increasingly drawn to the wildest, most perilous forms of magic, straining his partnership with Norrell, and putting at risk everything else he holds dear.

"What kind of magic can make an 800-page novel seem too short? Whatever it is, debut author Susanna Clarke is possessed by it."―USA Today

"From beginning to end, a perfect pleasure."―Neil Gaiman