Pious and Rebellious: Jewish Women in Medieval Europe (Tauber Institute for the Study of European Jewry) 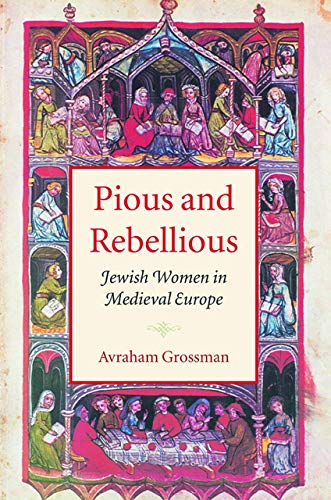 This volume, an amazing act of historical recovery and reconstruction, offers a comprehensive examination of Jewish women in Europe during the High Middle Ages (1000–1300). Avraham Grossman covers multiple aspects of women’s lives in medieval Jewish society, including the image of woman, the structure of the family unit, age at marriage, position in family and society, her place in economic and religious life, her education, her role in family ceremonies, violence against women, and the position of the divorcée and the widow in society. Grossman shows that the High Middle Ages saw a distinct improvement in the status of Jewish women in Europe relative to their status during the Talmudic period and in Muslim countries. If, during the twelfth century, rabbis applauded women as "pious and pure" because of their major role in the martyrdom of the Crusades of 1096, then by the end of the thirteenth century, rabbis complained that women were becoming bold and rebellious. Two main factors fostered this change: first, the transformation of Jewish society from agrarian to "bourgeois," with women performing an increasingly important function in the family economy; and second, the openness toward women in Christian Europe, where women were not subjected to strict limitations based upon conceptions of modesty, as was the case in Muslim countries. The heart of Grossman’s book concerns the improvement of Jewish women’s lot, and the efforts of secular and religious authorities to impede their new-found status. Bringing together a variety of sources including halakhic literature, biblical and talmudic exegesis, ethical literature and philosophy, love songs, folklore and popular literature, gravestones, and drawings, Grossman’s book reconstructs the hitherto unrecorded lives of Jewish women during the Middle Ages.

AVRAHAM GROSSMAN is Professor of Jewish History at the Hebrew University of Jerusalem, a member of the Israeli National Academy of Sciences, and recipient of the prestigious Israel Prize and Bialik Prize for Jewish Studies.