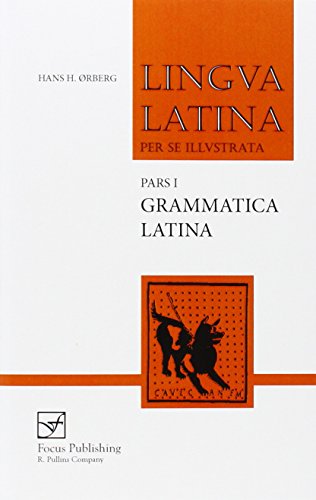 A Latin morphology to be used with Lingua Latina: Part I: Familia Romana.

Hans Henning Orberg (1920-2010) received his MA in English, French and Latin from the University of Copenhagen in 1946. He taught at various Danish high schools until 1963 and at the Grenaa Gymansium until 1988. From 1953 to 1961 he served on the staff of the Nature Method Institute, Copenhagen. He is the author of the Latin course "Lingua Latina secundum naturae rationem explicata" (1955-56); the course was revised in 1990-91, with a number of supplements, under the title "Lingua Latina per se illustrata". His books were published by Domus Latina, a publishing house he founded in Denmark, and they are distributed in the English speaking world by Focus Publishing.

Book Description Paperback. Condition: new. Paperback. A Latin morphology to be used with Lingua Latina: Part I: Familia Romana. transparency masters for use with Familia Romana Shipping may be from multiple locations in the US or from the UK, depending on stock availability. Seller Inventory # 9781585102235

Shipping: US$ 18.19
From United Kingdom to U.S.A.
Destination, rates & speeds