Items related to The Bomber War: The Allied Air Offensive Against Nazi...

The Bomber War: The Allied Air Offensive Against Nazi Germany 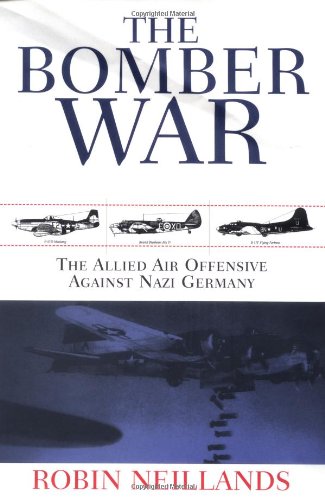 An authoritative study of the Allied bombing campaign against Nazi Germany draws on the recollections of British, American, Canadian, and other Allied pilots, as well as on those of German fliers and civilians, to explore the role and effectiveness of the campaign and the moral issues involved. 15,000 first printing.

"We must make war as we must, not as we would like," observed the great British general Lord Kitchener after witnessing the carnage of World War I. Former Royal Marines commando Robin Neillands concurs in this often grim account of a bombing campaign that devastated much of continental Europe in the cause of destroying Nazism.

In this history of the Allied air war over Europe, Neillands maintains that the use of bombers as strategic weapons aimed at the enemy's ability to wage war--as opposed to purely tactical weapons aimed at enemy troops--necessarily involved the loss of civilian life and the destruction of nonmilitary targets, however unintentional. One such target was Dresden, a once-beautiful city that, some historians have protested, had no strategic importance and merely served as an example of what would happen to the rest of Germany should the fighting continue. Those historians are off the mark, Neillands counters: Dresden produced essential war materiel, such as military aircraft engines, shell fuses, and cigarettes ("a vital product for maintaining wartime morale"), and thus it was a legitimate target. So, he continues, were cities such as Berlin, Ludwigshafen, and Hamburg, the last the site of a firestorm that killed some 46,000 civilians. Their deaths were unfortunate, Neillands suggests, but necessary in ending Hitler's regime and in inaugurating an era in which total war is unthinkable.

Neillands rightly observes that most histories of the Allied air war in Europe present either the English or the American side, and he does a good job of weaving both accounts, drawing on official histories and the memories of veterans (including some German fliers) alike. More detailed and technically inclined than recent work by Stephen Ambrose and other popular writers on World War II, his book makes a useful addition to the historical literature. --Gregory McNamee

Robin Neillands is a former Royal Marines Commando, is a journalist and writer. He has written several acclaimed books on World War II and military history, among them The Conquest of the Reich: D-Day to VE-Day, In the Combat Zone: Special Forces Since 1945, and The Hundred Years’ War. He lectures at the National Army Museum in London and is a member of the British Commission for Military History.

1. The Bomber War: The Allied Air Offensive Against Nazi Germany

2. The Bomber War: The Allied Air Offensive Against Nazi Germany

3. The Bomber War: The Allied Air Offensive Against Nazi Germany

4. The Bomber War: The Allied Air Offensive Against Nazi Germany