Items related to Love in the Days of Rage

Ferlinghetti, Lawrence Love in the Days of Rage

Love in the Days of Rage 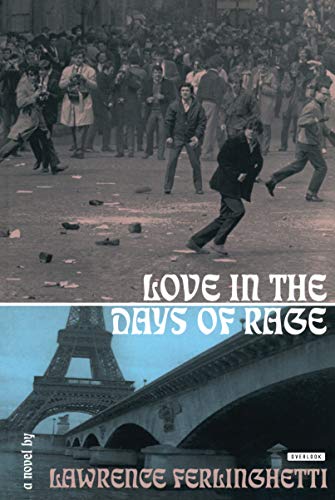 “The more I make love, the more I want revolution; the more I make revolution, the more I want to make love.” In Paris, in May of 1968, revolution, and love are very much in the air. The barricades are going up, the students of the Sorbonne are taking to streets alive with the graffiti of revolt, and the Odeon is ablaze with speechmaking. For Annie, a young American painter, and Julian, her Portuguese lover, a banker and anarchist, the events of that Paris spring form the backdrop against which their love affair is played. Annie sees the world through an artist's eyes; she is reckless in her passions, wanting and needing love with other people. There is none of this fanciful nonsense for Julian, an anarchist disdainful of the entire human race, who thinks even the enraged students storming the streets of Paris with their posters proclaiming “open the windows of your heart” and “revolution is the ecstasy of history” to be hopelessly naïve and sheeplike. Ferlinghetti charts the progress of love unfolding against those heady and momentous days when the pampered children of the bourgeoisie tried to find common cause with workers who despised them, “when Julian and Annie were in the heat of their love and reason.”

Lawrence Ferlinghetti was an integral part of the Beat movement, both as a bookseller and publisher of City Lights Press. He is the author of numerous books including A Coney Island of the Mind, which has sold nearly a million copies. A longtime resident of San Francisco, he has served as that city's Poet Laureate.

Ferlinghetti, the owner of City Lights bookstore in San Francisco and one of the last of the great beats, has produced a slim novel about "what the brain does to the heart," set in the midst of the student revolution of 1968 in Paris. The brain, here, belongs to a mysterious anarchist banker, Julian Mendes. Julian, who on the surface lives a comfortably bourgeois existence, was born in Portugal and came to political maturity under the dictatorship of Salazar. He belonged to an anarchist group in Portugal, but split from the group due to irreconcilable ideological differences Julian was an incorrigibly individualistic anarchist. He was inducted into the secrets of the banking world by a friend of his father's, who made him the heir of a small fortune when he died. In Paris in 1968 for reasons unexplained, he meets Annie, the heart (and eyes) of the book. An American painter somewhat like Joan Mitchell, Annie has gone from abstract expressionism to some compromise with figurative painting. She is teaching at the Beaux-Arts in the spring of 1968, and her students are caught up in the revolutionary currents. She is intrigued and a bit repulsed by Julian, who talks "left" like her father but dresses "right" like a conventional banker. Finally, Julian reveals the gratuitous act that he has been planning, and Annie agrees to become his accomplice. The story belongs to Annie's painterly eye, through which Paris achieves a very pictorial intensity. Annie herself never seems fully surrendered to the story her inner life, in the end, remains as opaque as Julian's act. What will remain with the reader is the lyric hopefulness of the tale, at this distance a slightly melancholic reminder of the events of that tempestuous year.

1. Love in the Days of Rage

2. Love in the Days of Rage

3. Love in the Days of Rage

4. Love in the Days of Rage

5. Love in the Days of Rage

6. Love in the Days of Rage Ferlinghetti, Lawrence