Items related to Jumbo: This Being the True Story of the Greatest Elephant...

Chambers, Paul Jumbo: This Being the True Story of the Greatest Elephant in the World 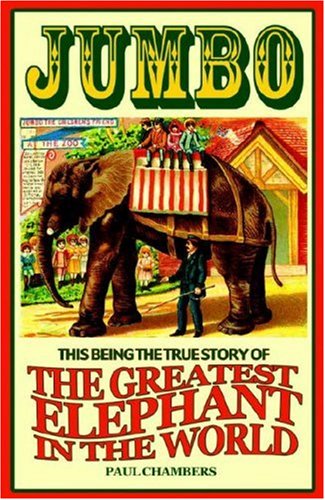 Jumbo was a superstar of the Victorian era. Every day tens of thousands of people would visit this adored animal known as “the Children’s Pet” or, more simply, “the Giant Elephant,” at the London Zoo. When P.T. Barnum purchased him for his Greatest Show on Earth, Jumbo’s transport to the U.S. made headlines for weeks, and he was an instant sensation in America. His name entered our lexicon as an adjective for oversized things, and half a century after his death his still-famous and unrivalled popularity was the inspiration for Walt Disney’s Dumbo. But fame comes at a price and, like so many modern celebrities, Jumbo led a troubled private life that was far from idyllic. His best friend – a zookeeper named Matthew Scott, who remained by Jumbo’s side in Britain and the United States for twenty years – was moody and manipulative, and Jumbo himself attracted rumors of violent tantrums, a fondness for drink, and of a “wife” he left behind in order to make it big in America.
From an eyewitness account of Jumbo’s capture in Africa after ivory hunters had killed his parents, to his early years at the Paris zoo where he was mistreated and regarded as a disappointing runt, to his stunning growth spurt in London where he became the largest elephant in captivity, to the “Jumbo craze” that swept across Britain and the United States, Paul Chambers utilizes new archival material in fully telling Jumbo’s story for the first time.

Paul Chambers is the author of eleven books on subjects as diverse as dinosaurs, the giant tortoise, and London’s Bedlam Hospital. He holds degrees in geology and paleontology, is a former television producer, and lives in Hertfordshire, southern England.

"In what could perhaps be called a tell-all biography, Paul Chambers explores the sad but remarkable life of the most famous circus elephant ever in his fascinating, carefully researched account. " — The Christian Science Monitor

"Clear-eyed, carefully researched, and crisply written, Chambers' book explores the surprisingly compelling life story of the African elephant whose name would become synonymous with "extra-extra-large"... And even now, more than 100 years after his death, you'd need a pretty thick skin to resist his charms." — Amy Reiter, Barnes & Noble Review

"Reading Paul Chambers' "Jumbo," the biography of the remarkable elephant born in Africa "around Christmas 1860" and groomed for outsized fame, one is never far from love or linguistics...By this able and animated accounting, Jumbo had a faithful "wife," an adoring public and a trainer who rarely left his side for over 30 years... Mr. Chambers does a good job of setting up Jumbo's story, taking care to offer important details about the anti-social Scott who preferred the company of animals to people; Abraham Bartlett, the superintendent of the London Zoo, who comes across as a chilly figure who was mostly interested in business...
This is a thoughtful book, bolstered and informed by science. Readers learn much about the habits and preferences of elephants, and while it is not clear that Jumbo and Alice his "wife," a smaller African elephant who came into Jumbo's life in 1865, ever mated, descriptions of their bonding and alliance are touching and memorable...
Mr. Chambers has carefully assembled here the legends and the legacies.... This gentle, well-wrought book takes readers to the thrilling places where it all began."
— The Washington Times
"Chambers' biography is the stuff of an E! True Hollywood Story — impoverished childhood, chance discovery, worldwide fame, self-serving managers and hangers-on, alcohol, broken marriage, tragic early death, and post-humous exploitation...Chambers does a remarkable job recreating his world, bringing to life his keepers (particularly wily showman P.T. Barnum) and imagining how his short, sad life must have been." — Entertainment Weekly

"Biography of a true giant, fleshed out with social history.... Using a wealth of documentary material, the author depicts with exceptional vividness the life of an elephant that became an icon." — Kirkus Reviews

"Chambers tells the colorful story of a magnificent animal . . . an account [that] is touching and entertaining." — Publishers Weekly

"Water for Elephants, move over! Paul Chambers' Jumbo is a circus saga with the same spirit of heart and adventure, with added heartbreak at the end, because it is all true. . . . Chambers imbues Jumbo with historical detail as well as a storyteller's gift." — Steve Shapiro, Book Maven, Rainy Day Books, Fairway, Kansas