Items related to China: The Balance Sheet: What the World Needs to Know...

China: The Balance Sheet: What the World Needs to Know Now About the Emerging Superpower 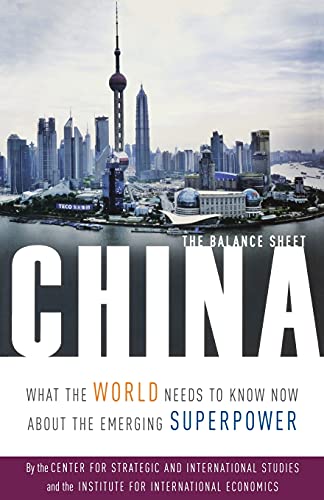 For centuries, China has proven difficult for Americans to understand. Today, however, China is becoming one of the most powerful countries in the world. As the 21st century unfurls, the stakes have never been higher for getting US policy toward China right. The direction that China and US-China relations take will define the strategic future of the world for years to come. No relationship matters more―for better or for worse―in resolving the enduring challenges of our time: maintaining stability among great powers, sustaining global economic growth, stemming dangerous weapons proliferation, countering terrorism, and confronting new transnational threats of infectious disease, environmental degradation, international crime, and failing states. And for the United States in particular, a rising China has an increasingly important impact on American prosperity and security, calling for some clear-eyed thinking and tough economic, political, and security choices. Put simply, the US-China relationship is too big to disregard and too critical to misread. This book is a joint project between the Institute for International Economics and the Center for Strategic and International Studies.

C. Fred Bergsten, senior fellow and director emeritus, was the founding director of the Peterson Institute for International Economics (formerly the Institute for International Economics) from 1981 through 2012. He is serving his second term as a member of the President's Advisory Committee for Trade Policy and Negotiations and was co-chairman of the Private Sector Advisory Group to the United States–India Trade Policy Forum, comprising the trade ministers of those two countries, during 2007–14.

Nicholas R. Lardy, called "everybody's guru on China" by the National Journal, is a senior fellow at the Peterson Institute for International Economics. He joined the Institute in March 2003 from the Brookings Institution, where he was a senior fellow in the Foreign Policy Studies Program (1995-03) and served as interim director of Foreign Policy Studies (2001). Lardy has written numerous articles and books on the Chinese economy including Debating China's Exchange Rate Policy (2008), Prospects for a US-Taiwan Free Trade Agreement (2004), Integrating China into the Global Economy (2002), and China's Unfinished Economic Revolution (1998). Lardy is a member of the Council on Foreign Relations and is a member of the editorial boards of the China Quarterly, Journal of Asian Business, China Review, and China Economic Review.

Derek J. Mitchell served as senior fellow and director of the Asia Division of the International Security Program at the Center for Strategic and International Studies (CSIS). Mitchell concurrently served as founding director of the CSIS Southeast Asia Initiative, which was inaugurated in January 2008 and was the Center's first dedicated program to the study of Southeast Asian affairs.

Bates Gill holds the Freeman Chair in China Studies at CSIS. He previously served as a senior fellow in Foreign Policy Studies and inaugural director of the Center for Northeast Asian Policy Studies at the Brookings Institution. In 1992-93, he held the Fei Yiming Chair in Comparative Politics at the Johns Hopkins University Center for Chinese and American Studies, Nanjing, China.

[A] very concise and useful framework for thinking about the Sino-American relationship and... the key challenges that we'll be facing. (Robert B. Zoellick, Deputy Secretary of State)

An excellent study of the outlook for Chinese national development and the likely future configurations of East Asian relations. (Foreign Affairs)

[A] comprehensive and penetrating analysis of the [US-China] relationship. (The Wall Street Journal)

1. China: The Balance Sheet: What the World Needs to Know Now About the Emerging Superpower

2. China: The Balance Sheet: What the World Needs to Know Now About the Emerging Superpower

3. China: The Balance Sheet: What the World Needs to Know Now About the Emerging Superpower

4. China: The Balance Sheet: What the World Needs to Know Now About the Emerging Superpower

5. China The Balance Sheet What the World Needs to Know Now About the Emerging Superpower

7. CHINA: THE BALANCE SHEET: WHAT T