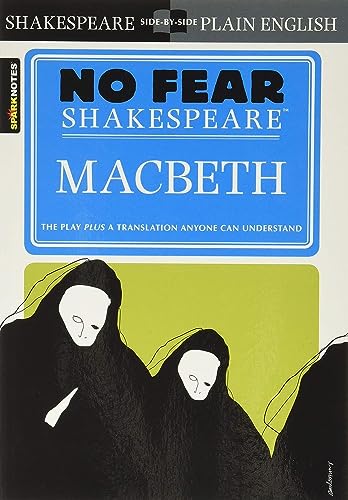 Read Shakespeare’s plays in all their brilliance—and understand what every word means!

Don’t be intimidated by Shakespeare! These popular guides make the Bard’s plays accessible and enjoyable.

Each No Fear guide contains:

Infamously known as the cursed Scottish play, Macbeth is perhaps Shakespeare's darkest tragedy. When General Macbeth is foretold by three witches that he will one day be King of Scotland, Lady Macbeth convinces him to get rid of anyone who could stand in his way including committing regicide. As Macbeth ascends to the throne through bloody murder, he becomes a tyrant consumed by fear and paranoia.

Josh Cooke as Banquo and others

Jeannie Elias as Second Witch and others

Chuma Gault as Lennox and Servant

Alan Shearman as Angus and others

Andr Sogliuzzo as Donalbain, Third Witch and others

Kris Tabori as Duncan and others

Book Description Spark Notes, United States, 2011. Paperback. Condition: New. Study Guide ed. Language: English. Brand new Book. No Fear Shakespeare gives you the complete text of Macbeth on the left-hand page, side-by-side with an easy-to-understand translation on the right.Each No Fear Shakespeare contains:The complete text of the original playA line-by-line translation that puts Shakespeare into everyday languageA complete list of characters with descriptionsPlenty of helpful commentary. Shakespeare's classic tale of witches, murder, and madness."Double, double toil and trouble; Fire burn and caldron bubble. Fillet of a fenny snake, In the caldron boil and bake; Eye of newt and toe of frog, Wool of bat and tongue of dog, Adder's fork and blind-worm's sting, Lizard's leg and howlet's wing, For a charm of powerful trouble, Like a hell-broth boil and bubble. Double, double toil and trouble; Fire burn and caldron bubble. Cool it with a baboon's blood, Then the charm is firm and good."Macbeth: IV.i 10-19; 35-38. Seller Inventory # AAJ9781586638467