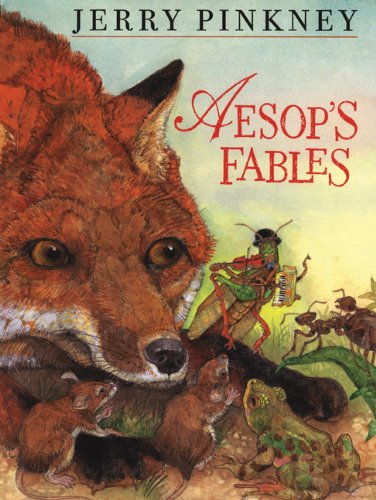 In this elegantly designed volume, more than sixty of Aesop's timeless fables have been carefully selected, humorously retold, and brought gloriously to life by four-time Caldecott Honor-winner Jerry Pinkney. Included are the Shepherd Boy and The Wolf, the Lion and the Mouse, the Tortoise and the Hare, plus many other charactersand moralsthat have inspired countless readers for centuries. With more than fifty magnificent full-color illustrations, this handsome edition is a must for every bookshelf.

Jerry Pinkney is the Caldecott Honor-winning illustrator of The Ugly Duckling, John Henry, Mirandy and Brother Wind, and The Talking Eggs. He has received the Coretta Scott King Award four times, was the 1998 U.S. nominee for the Hans Christian Andersen Illustration Award, and has received four gold medals and two silver medals from the Society of Illustrators. Mr. Pinkney lives in Croton-on-Hudson, New York.

Don’t count your chickens before they are hatched!” He is a wolf in sheep’s clothing.” She has a sour-grapes attitude.” They are killing the goose that laid the golden eggs.” He demands the lion’s share.” Don’t be like the boy who called wolf!’” These expressions are so much a part of our everyday language and culture that they seem to have been with us forever, and that is almost the case, for the fables that produced these proverbial sayings are indeed even older than (to name but three) the modern English, French, and German languages where today they are so much at home. The fables behind these sayings are those of arguably the most famous storyteller of all time, the legendary Aesop. Who was the man who created these timeless literary gems?

Aesop (sometimes spelled Ćsop, Ćsopus, Esop, Esope, or using the Greek form of his name Aisopos) has been known in history and in legend since the fifth century b.c., or earlier, as a gifted Greek storyteller and the author of the world’s best-known collection of fables. However, it cannot be proven with any degree of certainty that he existed as a real person. Most modern scholars believe that Aesop was instead a name invented, already in antiquity, to provide attribution for a body of oral tales whose true authors were a number of anonymous storytellers. Martin Luther expressed this view some 500 years ago: Attributing these stories to Aesop is, in my opinion, itself a fiction. Perhaps there has never been on earth a man by the name of Aesop” (quoted in Jacobs, History of the Aesopic Fabl, p. 15; see For Further Reading”).

Although it is possible that there was indeed a gifted Greek storyteller by the name of Aesop, his reputation expanded to legendary proportions in the decades and centuries following his death, and with time many more stories and deeds were credited to him than he could have composed and performed. Supporting this view, many of the earliest references to the stories of Aesop refer to Aesopic (or Aesopian) fables rather than Aesop’s fables. In other words, Aesopic, an adjective, describes a kind of story and a literary tradition but does not claim to identify a specific author.

One thing is certain: Aesop, if he existed at all, did not leave behind a collection of written fables. His reputation is that of an oral storyteller, not an author of written literature. The oldest references to his fables refer to tales memorized and retold, not written and read. For example, from Aristophanes’s comedy Wasps (written in 422 b.c.) we learn that telling anecdotes and comic stories in the style of Aesop was common entertainment at banquets in ancient Athens. More seriously, in 360 b.c. Plato recorded in his dialog Phaedo (section 61b) that Socrates, under sentence of death in prison, diverted himself by reformulating some of Aesop’s fables. Plato’s Phaedo quotes Socrates himself: I took some fables of Aesop, which I had ready at hand and knew, and turned them into verse.” The doomed philosopher did not have a book or manuscript of Aesop’s fables in prison with him, if such a book or manuscript even existed at the time. He knew the fables from memory, as did the partygoers in Aristophanes’s comedy.

The most frequently cited ancient reference to the man Aesop is found in the History of the Greco-Persian Wars written by the Greek historian Herodotus about 425 b.c. Here we learn that Aesop, the fable writer, was a slave of Iadmon, son of Hephaestopolis, a Samian, and that Iadmon’s grandson (also named Iadmon) claimed and received compensation for the murder of Aesop. If this account is true, Aesop would have lived during the sixth century b.c. Apart from this sketchy biography, Herodotus recorded essentially no additional details about the fable writer.

However, later Greek and Roman writers were not so reticent. One body of literature is particularly relevant in this regard. Usually referred to as The Life of Aesop, this work has survived in a number of medieval manuscripts by different anonymous compilers and is based on earlier accounts, now lost. The statements about Aesop’s life history contained in the different versions of this work often contradict one another, or they are so miraculous and fantastic as to be unbelievable by modern standards.

The ultimate source of these accounts is undoubtedly folklore: anonymous legends told and retold by generations of oral storytellers. The Life of Aesop is today generally held to be fiction, but as is the case with many legends, there could be at least a kernel of truth in one or more of the episodes. The following biographical outline has been gleaned from different versions of The Life of Aesop, most prominently the accounts published by Lloyd W. Daly in his Aesop without Morals (pp. 31 90) and the Everyman’s Library version of Aesop: Fables (pp. 17 45).

Aesop was born a slave, or possibly was captured into slavery at an early age. His birthplace is variously stated as Thrace, Phrygia, Ethiopia, Samos, Athens, or Sardis. He was dark-skinned. In fact, it is said that his name was derived from Aethiop (Ethiopian). He was physically deformed: a hunchback, pot belly, misshapen head, snub nose, and bandy legs are often mentioned. Although in his early years he suffered from a serious speech impediment, or according to some the inability to speak at all, he was cured through the intervention of a deity and became a gifted orator, especially skillful at incorporating fables into his speeches.

As a young man Aesop was transported by a slave trader to Ephesus (in modern Turkey). Because of his grotesque appearance, no one there would buy him, so he was taken to the island of Samos, where he was examined by Xanthus, identified in the manuscripts as an eminent philosopher,” but a person whose existence cannot be verified historically. At first repulsed by Aesop’s appearance, Xanthus changed his mind when the slave proclaimed, A philosopher should value a man for his mind, not for his body.” Impressed with Aesop’s astuteness, Xanthus purchased him as a manservant for his wife.

Aesop soon proved himself to be an irreverent and sarcastic trickster with a clever retort for every occasion. The following episode is typical of many others illustrating how Aesop’s quick wit saved him from punishment, sometimes deserved, sometimes not: Xanthus, wanting to know what fate awaited him on a particular day, sent Aesop to see if any crows were outside the door. According to popular belief, two crows would portend good fortune, whereas a single crow would be an omen of bad luck. Aesop saw a pair of crows and reported this to his master, who then set forth with good cheer. Upon opening the door, Xanthus saw only a single crow, for one of them had flown away, and he angrily turned on his slave for having tricked him into beginning a dangerous venture. You shall be whipped for this!” said Xanthus, and while Aesop was being readied for his punishment a messenger arrived at the door with an invitation for Xanthus to dine with his friends. Your omens have no meaning!” cried Aesop. I saw the auspicious pair of crows, yet I am about to be beaten like a dog, whereas you saw the ominous single crow, and you are about to make merry with your friends.” Perceiving the irony and the wisdom of this observation, Xanthus released Aesop and spared him the threatened punishment.

Aesop’s cleverness extended from word to deed. An unrepentant trickster, his pranks ranged from tricking his fellow slaves into carrying the heavier burdens to seducing his master’s wife with her unwitting husband’s apparent blessing. His tricks often were masked by feigned stupidity on his part, which has led commentators to compare him to the German Till Eulenspiegel and the Turkish Nasreddin Hoca, two of the world’s most rascally but beloved tricksters.

Aesop’s legendary wisdom and shrewdness sometimes moved into the realm of the supernatural. He could solve seemingly impossible riddles and conundrums, foretell the future with uncanny accuracy, and unerringly discover hidden treasures. A master of human psychology, he understood what motivated people to act, and used this knowledge to manipulate them to his advantage. As his life progressed he moved to ever greater venues: from a trickster in a slave’s workroom to a lecturer in a philosopher’s auditorium to a diplomat and councilor in the courts of governors and kings.

With time his cunning, wisdom, and oratory skills brought him freedom from slavery, but in the end they cost him his life. At Delphi the citizens, offended by his lack of respect for their aristocracy and for their principal deity Apollo, planted a golden cup in his baggage, then accused him of temple theft.

Sentenced to die by being thrown over a cliff, Aesop pleaded his case with a series of fables, one of which was the story of The Mouse, the Frog, and the Hawk” (no. 67 in the present collection). In this tale a frog and a mouse go swimming together in a pool with their feet tied together, but the mouse drowns. The frog, burdened by the dead mouse, is now an easy prey for a hawk, which forthwith captures and devours him.

Aesop compared himself to the mouse and the Delphians to the frog. You may kill me,” he predicted, but my unjust death will bring you great misfortune.” Aesop was executed near Delphi, and his dire prediction came true. Shortly after his death the region was visited with famine, pestilence, and warfare. The Delphians consulted the Oracle of Apollo as to the source of these calamities, and they received the answer that they were to make amends for the unjust death of Aesop. Accordingly they built there a pyramid in his honor.